The beach near Dooagh village on Achill Island was washed away in 1984 but over the past few weeks has returned, to the joy of local people and holidaymakers. Video: Sean Molloy 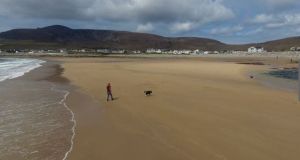 Dooagh beach on Achill when it reappared in 2017. The thousands of tonnes of sand have now been washed away. File photograph: Sean Molloy

A beach on Achill island, Co Mayo, which reappeared in 2017 having been gone for more than 30 years, has disappeared again.

Dooagh beach was washed away during the winter of 1984 but returned during April 2017 after hundreds of thousands of tonnes of sand was deposited back on the shoreline.

However, the beach has been washed away again in recent weeks.

“This winter has seen the Irish coast hit by some strong storms and locals noticed that the sand levels had been gradually eroding,” said Seamus Molloy of Achill Tourism.

“During the past month, some heavy seas have once again been pounding the Achill shoreline and have resulted in almost all of the sand being washed away and replaced by large boulders.”

Mr Molloy said over the last few months Achill Island had received a “significant tourism boost” with Dooagh Beach drawing in TV crews from the UK, France, Germany, the Netherlands and the US.

Visitor numbers to the island increased by 70 per cent in the months after the beach reappeared and 79 jobs were created in the area.

Locals have been “disappointed” by the beach’s disappearance, he added.

“There was an air of inevitability. It was gone for years and years so we were always saying ‘what happens if it goes again?’. We kind of were expecting that it would go again,” he said.

“If you’re under 40 you only remember it as a very young child or in the last couple of years, more or less you would be expecting it to go again. There’s not much you can do with nature.”

The beach had originally sustained four hotels and a number of guesthouses before it vanished. Currachs had also launched from the beach before a pier was built in 1927, and its sand was mixed with seaweed to enrich soil and fertilise crops.

Mr Greene visited the island in the late 1940s with his partner, Catherine Walston, and the couple stayed in a cottage in Dooagh that had no electricity and just one outside tap for water.

He is said to have written parts of The Heart of the Matter and The Fallen Idol, along with poetry, while there.

Ms Lansbury, who starred in Murder She Wrote, visited the beach as a child in the 1930s.

“In 2017 when it reappeared it was over the Easter period and it was a very cold snap,” Mr Molloy added.

“It was a very strong wind but it was a constant northerly wind and it was just in the right direction to bring the sand back in. It was a very freak occurrence.

“I wouldn’t be holding my breath that it will come back again in April but you would never know.”