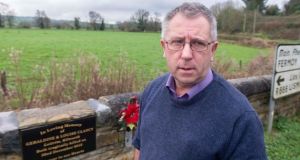 Noel Clancy at the spot where his wife and daughter were killed near Kilworth, Co Cork, in 2015. Photograph: Michael Mac Sweeney/Provision

The Road Safety Authority (RSA) has received a number of complaints about a hard-hitting TV ad on the issue of unaccompanied learner drivers, but says feedback to its Crashed Lives campaign has generally been positive.

The latest in the series of ads features Co Cork farmer Noel Clancy (59) speaking about the impact that a crash in which his wife Geraldine (58) and daughter Louise (22) died had on the family.

The women were in a car which was hit by a vehicle driven by Susan Gleeson, an unaccompanied learner driver, near their home in Kilworth on December 22nd, 2015. The Clancys' car was propelled through a gap in a wall by the impact and ended up on its roof in a flooded drain, where they both drowned.

Ms Gleeson later pleaded guilty to dangerous driving causing the deaths of the women and received a three-year suspended jail sentence as well as a 15-year driving ban.

Mr Clancy agreed to be part of the RSA campaign to highlight changes in the law. Car owners who allow learners to drive unaccompanied face are having their cars confiscated by gardaí.

The ad aired nine times on RTÉ TV and five times on Virgin channels over the Christmas period and has prompted debate including in Kilworth, with some saying it was unnecessarily harsh on Ms Gleeson.

Locals were reluctant to talk on the record about the ad but it has also prompted commentary on social media, where it has been described as “being in extremely bad taste”.

The RSA confirmed it had received 10 emails from people expressing dissatisfaction with the ad and that the main thrust of the criticism is that it was “inappropriate and unfair on the other driver”. The authority was unable to say if any of these complaints came from Kilworth.

It said there had also been “a significant amount of positive sentiment” supporting the new law, which has been named in memory of Geraldine and Louise Clancy.

“When developing the ad we were very conscious of the need to be aware of the impact of the tragic incident on the immediate families, the community and all whose lives are touched by incidents on our roads. Therefore in developing the campaign, the RSA consulted with all parties concerned,” the authority said.

The RSA would not be drawn if this involved consulting with the Gleeson family but said the intention of the ad was to get people to comply with the new law.