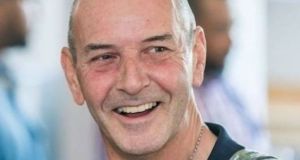 A man accused of murdering Irish charity worker John Curran in South Africa has refused to abandon his bail application despite being advised to do so by his legal counsel.

Mitspa Mzakomba Onyoka (24), with an address of Villa Torino, Riebeek Street, Goodwood, appeared at Cape Town magistrates’ court on Monday morning, where police looking into the veracity of the bail information he gave to investigating officers were due to report back on their findings.

Last week, a magistrate postponed Mr Onyoka’s bail hearing to allow police to confirm the suspect’s address and whether any outstanding warrants for his arrest existed.

At that time , the accused was granted the services of a French-speaking interpreter and legal aid to seek bail.

Mr Onyoka, who is originally from the Democratic Republic of Congo, was arrested on November 23rd at his place of work on Voortrekker road in Cape Town.

The next day he was charged with murdering Mr Curran at his apartment on Buitengracht Street, and also with aggravated burglary. Mr Onyoka has yet to plead to the charges against him.

State prosecutor Leon Snyman told the court that although the address thea ccused gave to police was correct, the people who owned the house said he was no longer welcome there.

In addition, Mr Snyman said the accused has been illegally residing in South Africa since 2015, as the Department of Home Affairs has no record of him being in the country after that year.

Mr Snyman told the court that for these reasons the state would strongly oppose his bail application.

Despite being advised to abandon his bail application by his defence lawyer, Mr Onyoka refused to do so .

Mr Curran, a 60-year-old former school principal from Dublin who had just finished working in Cape Town as the director of education for Irish charity Mellon Educate, had been due to return to Ireland.

He was having a holiday for a couple of weeks in South Africa prior to returning home, and had rented an apartment in a building in the downtown area of the Western Cape provincial capital for the duration of his vacation.

Postmortem results revealed Mr Curran was hit over the head with a blunt object before he was stabbed multiple times with a knife.

1 Irish tourists excluded from visiting Greece and Croatia
2 Number of women dying by suicide increased by almost 50% last year
3 Taoiseach has confirmed schools will reopen at the end of August
4 Rise in pension age poses potential problem in coalition talks
5 Covid-19: Pupils may be kept apart in groups and pods when schools reopen
Real news has value SUBSCRIBE