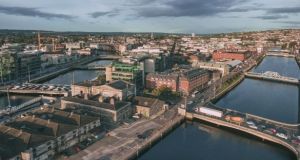 An €80 million event centre in Cork was granted planning permission by the city council. Photograph: iStock

Cork City Council has granted planning permission for an €80 million event centre on the site of the former Beamish & Crawford brewery in the city centre.

While tourism and business leaders welcome the decision they are also urging the Government to resolve funding issues.

Chair of the Cork branch of the Irish Hotels Federation, Neil Grant, said the decision to grant planning for the revised plan for the 6,000-capacity centre was very welcome and represented a “huge step” towards making the project a reality.

The council’s decision comes with 48 conditions but they will not require any significant changes to the submitted designs.

An application for a larger venue was first lodged by BAM in summer 2018, but in October 2018 planners requested further information on the project, which on completion will be operated by concert promoters, Live Nation.

Council planners had concerns about the “defensive nature” of the design, which they felt did not make full use of its central and riverfront location. BAM then asked for an extension to make changes.

The revised proposals included reducing the capacity for all-seated events to 4,000, including LED screens at street level to display event and tourism information and locating a ticket office at the South Main St entrance.

Mr Grant said the next step was to resolve the project’s funding – the developer is seeking an extra €10 million on top of the €20 million provided by the Government and the council.

“We’re hopeful that can be resolved . . . Leo Varadkar seemed to indicate the financing side was moving in the right direction so it’s very positive,” he said.

The delivery is essential to the hotel sector in Cork, which will see a 50 per cent increase in bedrooms over the coming years, he said. “We need a demand driver like the event centre.”

Mr Grant’s comments were echoed by the chief executive of Cork Business Association Lawrence Owens who said it was “a step in the right direction”. “We await with interest to see if there will be any objections but hopefully that won’t happen.”

Mr Owens was optimistic about the funding for the centre, saying that the issue looks to be “resolved” based on recent comments from Taoiseach Leo Varadkar and Tánaiste Simon Coveney.

“Hopefully we will see it up and running by 2022 – there’s been a lot of to-ing and fro-ing but hopefully this will give it momentum now.”