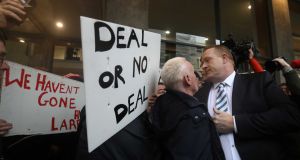 Farmers block Cormac Healy from Meat Industry Ireland from entering the Department of Agriculture in Dublin for ameeting of the beef taskforce. Photograph: Leah Farrell/RollingNews.

The first meeting of the newly established beef taskforce, set up as part of negotiations to end farmer protests around the country, was immediately suspended on Monday because two farmers are still facing injunctions.

A group of about 20 independent farmers blocked representatives from the processor’s gorup Meat Industry Ireland (MII) from entering the Department of Agriculture for the talks in protest at the outstanding legal proceedings.

The standoff between the meat industry representatives and some farmers lasted for about 10 minutes before the MII officials left. In a statement after the protest, MII said a delegation of its members sought to attend the taskforce meeting but “on their arrival they were physically and aggressively prevented from doing so by protesters”.

It is understood that all sides - from the Department of Agriculture, other State bodies, farmers and the meat industry - agreed that injunctions need to be lifted before the talks can proceed.

Minister for Agriculture Food and Marine Michael Creed has condemned the altercation.

“It is in the interests of everyone involved in the beef industry that the work of the taskforce goes ahead. The taskforce’s remit is to monitor the implementation of the actions arising from the agreement reached on 15 September and offers the most viable platform for strategic engagement with key stakeholders,” he said.

“It was a great pity that farm representatives were not in a position to air the legitimate concerns of farmers at the taskforce.”

The two farmers continuing to face injunctions were involved in blockades at C&D Foods, a pet food factory in Co Longford owned by Larry Goodman’s ABP Group, which is part of MII.

However, a spokeswoman for C&D Foods said the company is “financed and managed” separately from ABP, is not a member of MII and “does not buy or process cattle”.

Irish Farmers’ Association president Joe Healy said the refusal to lift all the injunctions against farmers arising from the recent dispute was disappointing.

Dermot O’Brien, a spokesman for the Beef Plan Movement, said the organisation was disappointed the talks did not convene.

“We are unhappy with the injunctions that are still remaining with farmers, we want to see these removed,” Mr O’Brien said.

He added that he hoped the situation would not result in farmers returning to pickets outside factories and that the movement would “not condone any such physical action” such as the behaviour of the protesters towards MII.

A spokesman for the Irish Natura and Hill Farmers’ Association (INHFA) said that “until all injunctions and legal proceedings are lifted from the affected farmers the actions, the its position would be that it would not take part in the taskforce discussions.

Establishing the taskforce was agreed at talks on the future of the beef industry last month, which brought an end to more than two months of farmer protests across the country. Retailers are not included.

The protests resulted in the beef sector in Ireland effectively shutting down, and approximately 3,000 factory workers being temporarily laid off.

The role of the group, which includes officials from the Department of Agriculture, other State bodies, farmers and the meat industry, is to ensure the implementation of the agreement reached at the talks.

The agreement led to the introduction of new bonus payments, with producers getting immediate benefits from increased price for cattle at the factory gates.

It also saw the introduction of new bonuses and reforms, as well as a commitment to carry out an independent review of the Irish beef sector by the end of the year.

The agreement recommended greater transparency in price, from farmer to retailer.