Trolley patients half the levels of this time last year, but surge expected

December 28th, 2018: Simon Harris insists there are enough GPs to provide abortion services across the country from next week despite only 145 GPs having signed up. 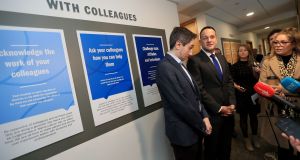 The number of patients on hospital trolleys has halved in comparison to this time last year but the Government and health services are expecting a surge in hospital attendances by next week.

Minister for Health Simon Harris and the Taoiseach Leo Varadkar have made a plea to the public to remain at home if they are suffering with head colds or viruses in order to stop the spread of infections throughout communities.

The drop in the number of patients on trolleys has been attributed to low levels of the flu, milder weather, an increase in homecare packages and targeted measures in key hospitals around the country.

A decrease in the number of delayed discharges in comparison to November is also being credited as the figures dropped from 623 to 471.

Mr Varadkar said a surge in attendances to emergency departments is anticipated in the New Year.

“However that is just one day and we know that there will be a surge in attendances to our emergency departments over the next couple of weeks so we are asking people to make sure only to use emergency departments for emergencies, there are other services available, and to ask people if they are sick to bear in mind that they can pass on that illness too, so don’t visit elderly relatives, don’t visit other people who are sick.

“Flu levels are much lower than they were this time last year, but we expect them to peak in the weeks ahead. For anyone who has not got the flu vaccine yet, it is not too late to get it.”

Mr Harris said it was “encouraging” to see the drop in trolley numbers but appealed to the public to help stop the spread of viruses.

He asked the public to “exercise common sense over the coming weeks to try and not spread viruses throughout the community.”

David Hughes of the Irish Nurses’ and Midwives’ Organisation (INMO) said the mild weather has also helped. “We have been very fortunate weather-wise. The mildness of the weather has contributed greatly to the improvement and the home care packages definitely has made an impact but we have a long way before we are out of the woods.”

There were 111 people on trolleys around the country as of 8am yesterday, which is a 51 per cent decrease on the same time last year, the HSE said. Targeted measures being taken in hospitals and in community healthcare include extended hours of injury units, and allowing GPs to give patients access to diagnostic tools without having to go to emergency departments.

Meanwhile Mr Varadkar has said that the Government will be standing by its pay deal after more than 7,000 support staff in hospitals including healthcare assistants and lab personnel warned of strikes over pay.

The Taoiseach said patients will “lose out” if there is strike action.

“First of all I don’t think anyone would like to see any strike action happen across our health service because ultimately patients will lose out if that happen. We have a pay deal with public servants and the Government will honour that pay deal.

“As Paschal Donohoe often says and rightly says, there only is a certain amount of money and a huge amount of the extra money is going into pay increases for our hard working staff but we also need money to hire new staff, to build new schools and hospitals, to renew equipment, to approve new medicines, so we have to get the balance right between money spent on pay increases and money spent on extra staff and extra services and I think we have that balance right.”

Mr Harris said he was “disappointed” the oversight group to address pay disputes has not met yet.

“There is a mechanism by where all of these issues can be teased out, it’s called the oversight group. The oversight group does not report to me or the Government but I think it is disappointing that it is yet to meet in relation to the nurse’s dispute, and I really hope that that meets sooner rather than later.