Some support-grade staff underpaid by up to €6,000 a year, union claims 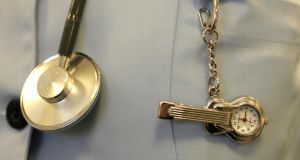 Nurses and midwives look set to stage a series of 24-hour work stoppages in hospitals across the country. Photograph: Frank Miller

The health service is facing further industrial unrest in the weeks ahead as more than 7,000 support staff in hospitals including healthcare assistants and laboratory personnel warn of strikes over pay.

The trade union Siptu said the Government had refused to pay staff in support grades additional money on foot of the findings of a job-evaluation scheme which assessed whether roles and responsibilities of staff had changed.

The union argued that some personnel were underpaid by up to €6,000 a year.

Siptu is expected to announce formally on Friday that it will ballot more than 7,000 support-grade staff in the health service for strike action early in 2019.

The warning comes as more than 40,000 nurses, midwives and psychiatric nurses have already voted for strike action over pay.

The nurses and midwives look set to stage a series of 24-hour work stoppages in hospitals across the country as part of a campaign for an across-the-board pay increase of up to 12 per cent to tackle recruitment and retention problems.

The executive of the Irish Nurses and Midwives Organisation (INMO) is scheduled to meet on January 7th to consider when the proposed work stoppages will take place.

The leadership of the Psychiatric Nurses Association will meet on January 10th to consider its next steps after members voted for strike action.

Siptu health division organiser Paul Bell said the first and second phases of a job-evaluation scheme for healthcare support staff had determined that the union’s members employed in several grades, including healthcare assistants, maternity care assistants, laboratory aides and surgical instrument technicians, “had been substantially underpaid for many years”.

He said the findings of the review would see many members advancing one or two points along the existing four-band support staff pay scale.

Siptu suggested that implementing the findings of the job-evaluation scheme could cost about €17 million.

“The agreed job-evaluation process has independently confirmed that thousands of support staff employed directly by the HSE and in section 38 organisations [voluntary healthcare organisation] perform duties of a higher skill set than those set out in their original job descriptions. In some cases, our members in these organisations have been underpaid by up to €6,000 a year”, Mr Bell said.

He said the Government and the HSE had ignored requests from the union to engage with Siptu representatives regarding the job-evaluation process.

“We agreed with the Government on the reintroduction the support staff job-evaluation scheme in 2016, after it had been suspended in 2009. Unfortunately, the HSE and Department of Public Expenditure and Reform delayed the commence of the evaluation process and have further delayed.”

The issue of pay for healthcare assistants in extremely sensitive for the HSE at present given the looming dispute with nurses.

Nurses have contended that on certain points of their respective pay scales, healthcare assistants are paid more than some nurses.

1 ‘We are worried’: Taoiseach warns plan to reopen all pubs on July 20th may be delayed
2 Man (21) charged over shots fired at gardaí in Cork
3 Cabinet extends advice to avoid non essential travel until July 20th
4 Judge dismisses €60,000 claim over boy (3) who cut his lip in fall
5 Minister for Children condemns ‘homophobic’ attacks from ‘far-right’
Real news has value SUBSCRIBE