Cork teenager celebrating Christmas after life-saving tumour operation in US 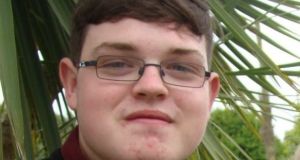 A teenager who was told his cancer in the skull was terminal has arrived back in Cork to celebrate Christmas after a successful life-saving operation in the United States.

This summer Aaron McMahon (18), of Shanagarry, underwent an arduous 11-hour surgery to remove a chordoma tumour at the University of Pittsburgh Medical Centre.

The 186cm (6ft 1in) Manchester City fan had most recently received treatment in Essen, Germany, and had been back in the US for tests earlier this month.

His father, Paul McMahon, says after a traumatic couple of years they are looking forward to having a few days reprieve over Christmas.

“I am telling everyone to just throw their mobile phones in a bucket in the house. I have my best pal here Aaron helping me put up lights.” Aaron’s brother, Andrew, is also due home for Christmas.

“When we were told Aaron was terminal we didn’t know if we would see this Christmas. We were told it was palliative care but we wouldn’t give up. If we had done what they [medical personnel in Ireland] told us to do, Aaron would be dead. I have no doubt we would be visiting a grave this Christmas.”

Paul promised his wife Gail that they would explore every option to save their son’s life. He once even joked with her that if all else failed he would “go down to west Cork and ask the O’Donovan brothers to row them over to the states”.

“Everything I hoped for came true but we are still fighting a battle,” he said. While the tumour was removed, Aaron will require numerous trips to the US and Germany over the coming years. He still has health difficulties and challenges and is on 12 tablets a day.

Paul says there is a long road ahead for his son who has had a number of setbacks. “They call it ‘no active disease’. His tumour has been removed but this cancer originates in the bone. He has not been given a cancer-clear diagnosis and there are still risks. There are new treatments coming. There are new trials out there and all these kinds of things which I am following like a hawk. There is always a chance of a reoccurrence of the cancer.”

Aaron has yet to secure a new oncologist in the State and his father says they have received no help from official Ireland.

His father wants to see Aaron go on to live the life he deserves. “He is very talented with his hands. He is good with music. He just needs a chance.”

Aaron is celebrating every milestone. He hopes to attend a Premiership match in the new year.

Paul says they are extremely grateful for the “phenomenal” community fundraising efforts for Aaron on his GoFundMe page. They also appreciate the support of the Gavin Glynn Foundation, an organisation which helps families seeking medical treatment abroad for children.

The fundraising will have to continue as the family are back in Pittsburgh in the new year and are still awaiting their hospital bill for surgery. His treatment will be ongoing for the coming years.

Aaron first spotted his reoccurring headaches in 2013 and they got progressively worse by 2016. He was diagnosed with a brain tumour and had surgery in Dublin before going to Germany for treatment.

Earlier this year the family were told his condition was terminal. However, surgeons in Pittsburgh intervened and he had surgery in the summer.

Chordoma is part of a group of malignant bone and soft-tissue tumours called sarcoma and is diagnosed in one million people globally a year.