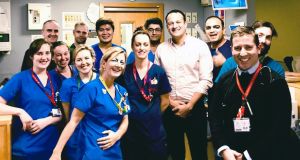 Taoiseach Leo Varadkar on Christmas Day with staff at the emergency department at Cork University Hospital.

Nearly three dozen people – many of them nurses – wrote to Taoiseach Leo Varadkar to complain about his comments about healthcare staff taking leave in the busy period after Christmas.

However, a small number of people wrote to the Department of An Taoiseach supporting Mr Varadkar’s comments in the Dáil last month.

On November 7th, the Taoiseach said the health service needed to make sure this winter that consultants would “not be on holidays in the first week of the year, particularly those who work in emergency departments, and that nurses will not be on leave in the first two weeks of January”.

He said in the busy period after Christmas “we need to make sure that every bed will be open” and that radiology facilities and laboratories were fully operational.

The department released 35 emails and letters, with the identification of the writers redacted, which it had received from members of the public on foot of Mr Varadkar’s remarks.

Various writers said they were “outraged” or “stunned” at his comments.

A number argued that Mr Varadkar should use his medical training to help out doctors working in an emergency department over Christmas.

“As a very hard-working nurse, I am absolutely disgusted and furious with your comments regarding nurses and Christmas holidays,” wrote one. “Firstly if you knew anything, nurses do not take extended leave over Christmas. We are lucky to get an extra day off. Do you want us to come in on our days off!!!!”

Thanks @campaignforleo for stopping by @CUH_Cork Emergency Department today and acknowledging the sacrifices of all frontline @PeopleofHSE during the Christmas holidays pic.twitter.com/iJtfaEnU6r

No annual leave for us Leo, hope you're enjoying the turkey. All the best from the Maternity in Portlaoise #WeAreWorking #ImAtWorkLeo pic.twitter.com/W0qSP1DKUP

Another wrote: “Last Christmas I left my family at home (as I have done many years) and I went to work. Night duty on 25/26 December. Neither I nor any of my colleagues had so much as a coffee break as we were working so hard to keep up with the workload. In my hospital there is no annual leave for nurses over the Christmas period and all beds remain open.”

A parent of a nurse told Mr Varadkar that the problem in the health service was not money but rather leadership and moral courage.

The letter writer called for nurses’ pay to be doubled through the provision of additional allowances and for them to be provided with meals and car parking spaces.

“My daughter would often get no time off because on her days off ‘management’ would regularly hound her to come in to cover for someone who did not show up due to sickness. Thus on her days ‘off’ she had no peace of mind. She aged seven years in one single year.”

One doctor wrote to the Taoiseach highlighting how various medical, nursing and other staff would be at work.

“May I mention too that during this time I will be missing an important and special family holiday as we are prohibited from taking leave during this period.

“I hope you think of us as you tuck into your turkey. We will certainly remember your offensive and disillusioning remarks on election day as we consider greener pastures.”

However there were some messages supporting Mr Varadkar’s comments.

One letter writer maintained a relative had had to spend the Christmas period in hospital a number of years ago “because her consultant, his whole team and indeed all consultants and teams were on extended Christmas holidays. During this period, there was one nurse on duty in the isolation ward and one A&E doctor on call.

“The Taoiseach is perfectly right to call out hospital staff taking extended Christmas holidays at one of the busiest times of the year.”

“We did have objections to this but our main point was, what was the point of administrative staff coming in to cover the Christmas period when there were no clinics as the nurses and doctors were not coming in.

“I am right behind you as I always believed this was unbelievable in a setting where we are meant to be caring for Ireland’s most needy and vulnerable people.”

Mr Varadkar visited Cork University Hospital on Christmas Day where he acknowledged the work of frontline staff. Staff members in hospitals around the country have taken to Twitter in recent days posting images of themselves at work with the hashtags #WeAreWorking and #IAmAtWorkLeo.