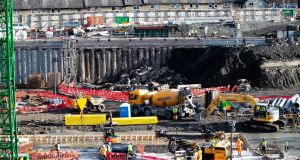 A view of the construction site of The National Children’s Hospital. Photograph: Tom Honan 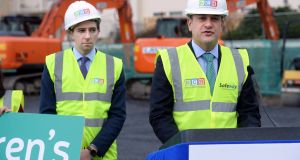 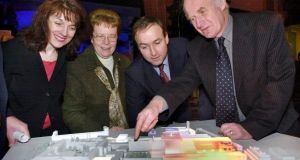 At the unveiling of the model of the Development Control Plan for the Mater & Children’s Hospital Developments which will create a new hospital campus in 2001. From left: Laura Magahy, Sr Helena O’Donoghue, Micheál Martin Martin Cowley 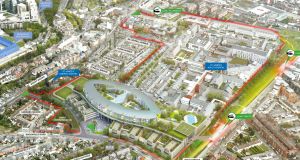 External design of the new children’s hospital is unveiled 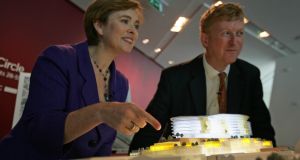 1993: A single, tertiary children’s hospital for Dublin is proposed by the Royal College of Physicians of Ireland. It recommended the centre be built on an adult hospital site.

2005: Then minister for health Mary Harney initiates a review of tertiary paediatric hospital services in September.

HSE chief executive Prof Brendan Drumm says a new children’s hospital “should ideally be in the city centre or close to the Mater site”.

A HSE taskforce picks the Mater campus as the site of the hospital in June and this is endorsed by government. There are many objections by interest groups to the site.

2007: Then minister for health Mary Harney establishes the National Paediatric Hospital Development Board (NPHDB) for the development of the hospital.

Then minister for health James Reilly announces an independent team to review site decision in May. It reports the correct site was chosen. A planning application is submitted.

2012: An Bord Pleanála refuses planning permission. The board said the proposed development would “constitute overdevelopment”. About €35 million spent so far will be written off.

Mr Reilly establishes the Dolphin Group to review the issue. On receiving its report, Mr Reilly announces St James’s Hospital as the new site. Critics say the site is too small, with poor access for traffic.

2015: After considerable delay, a planning application is lodged in August. Estimated price is €650 million and completion date is 2020.

2016: An Bord Pleanála grants planning permission for the project on a 12-acre site in the grounds of St James’s Hospital, together with satellite clinics in Tallaght and Blanchardstown.

2017: The Government approves a construction budget of €983m for the hospital in April. In August, the NPHDB is told costs have gone up by €200 million. The Department of Health was told of concerns over costs on August 24th and Minister for Health Simon Harris was told on August 27th.

In December, the Government decides to proceed with the project at the increased price. The Irish Times reveals the cost of construction has now increased to €1.43 billion, and overall costs – including equipping and integration, to €1.73 billion.

2019: The Oireachtas health committee and the Dail public accounts committee begin separate investigations into the cost overrun. Consultants PWC are engaged to review the issue. Tom Costello becomes the third chair of the NPHDB to resign. The Government promises to amend the terms of reference of the PWC review to individual accountability can be identified.