‘My operation needs to be done as soon as possible... this situation is really for some of us life-threatening’ 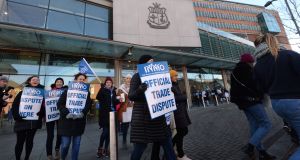 The HSE has warned that hospital emergency departments will come under “extreme pressure” during the two days of nurses’ strikes this week.

It has urged patients with minor injuries to attend their local GP instead of going to hospitals to leave services clear for severely ill patients.

More than 50,000 patients are expected to be affected by this week’s industrial action on Tuesday and Thursday. The strikes follow a 24-hour stoppage last week which affected up to 25,000 patients.

An estimated 13,000 out-patients and 2,000 in-patients and day care patients are set to be affected by each day of strike action this week, the HSE said on Monday. It added that “upwards of 25,000 to 26,000” contacts and appointments would be deferred or cancelled.

Angela Fitzgerald, the HSE’s national director for acute operations, apologised for the “disruption and distress” and said the health service was working with the Irish Nurses and Midwives Organisation (INMO) to “minimise the impact and ensure essential services run as normal”.

Ms Fitzgerald said maternity services would operate as normal but urged any person with a minor injury to see their GP, warning of “significant delays” in emergency departments. She said a small number of “urgent” and “complex” surgery appointments would go ahead.

All routine community nursing services and health centre nurse clinics on Tuesday and Thursday will be cancelled while day hospitals for older people or people with disabilities will be closed. Admissions for respite and rehabilitation through public community nursing units have also been cancelled along with all planned admissions of respite services for people with intellectual disabilities.

The Psychiatric Nurses Association (PNA) will also withdraw overtime cooperation this week, leading to “significant disruptions on all HSE mental health services” from Tuesday to Friday.

HSE national clinical adviser Dr Vida Hamilton reassured the families of inpatients that their loved ones were “safe and being looked after”. Any person affected by a cancellation will be contacted by the hospital, she said.

Patients affected by cancellations took to the airwaves on Monday to express their concern over the health implications of the nurses’ strike action.

Alexandra Trotsenko, who was scheduled to undergo surgery for breast cancer on Tuesday, told RTÉ’s Liveline programme that she received a call on Monday morning saying the operation had been cancelled. “My operation needs to be done as soon as possible before the cancer starts to spread. It’s invasive cancer so the sooner the better. This situation is really for some of us life-threatening.”

A woman named Claire said she called the hospital on Sunday and was told her surgery, scheduled for Monday, would go ahead. “I was taking this stuff all day yesterday... I’m sick as a dog now. They rang at 6.30pm to say my surgery was cancelled.”

A caller named Sue, who said she has been working as a nurse for 20 years, said nurses did not want to strike but that the service urgently needed more staff and a safer work environment. “Demand for pay parity is to encourage more nurses into the sector, to prevent the nurses we are training from leaving, going to Australia and England. Nobody goes into nursing for money but we also don’t go into nursing to work in an unsafe environment.”