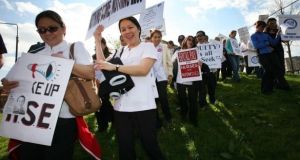 A series of planned strikes by thousands of nurses and midwives is still set to go ahead next week after talks between their union and health managers aimed at resolving the dispute were adjourned late on Friday.

The parties held talks at the Labour Court for more than 10 hours and are due to meet again on Saturday afternoon. A rally in support of the industrial action being taken by the Irish Nurses and Midwives Organisation (INMO) is set to take place in Dublin before the talks resume.

The Government has maintained that the nurses’ pay demands would cost €300 million and likely lead to knock-on claims from other public service groups.

Members of the INMO and the Psychiatric Nurses Association (PNA) are scheduled to strike next Tuesday, Wednesday and Thursday, a move which is causing increasing alarm among health service managers.

The HSE is understood to have sent a formal letter to the Government on Friday drawing attention to potential patient safety risks arising in the event of the three strikes going ahead.

More than 80,000 people have already been affected by medical procedures and out-patient clinic appointments being cancelled as a result of three work stoppages being held in recent weeks by the INMO.

Phil Ní Sheaghdha, the INMO general secretary, said Friday’s talks involved “exploring all the issues of concern to us and, obviously, with the management side it is the impact of those”. She said “an information-sharing “ approach had been adopted.

When asked if pay rises for nurses formed part of the talks, Ms Ní Sheaghdha said she was unwilling to go into the “ins and outs” of what had been discussed.

Patricia King, the general secretary of the Irish Congress of Trade Unions, said the management side had a better understanding of the issues of concern to the nurses and midwives after Friday’s discussion.

Asked whether the three planned days of strikes were still going ahead at this stage, Ms King replied “absolutely”.

Separately, the PNA said it was planning to escalate its campaign of industrial action with three additional 24-hour stoppages scheduled to take place later this month.

The decision of the national executive of the union came as the Labour Court talks, in which the PNA said it was not invited to participate, took place.

Peter Hughes, the PNA’s general secretary, said the decision to stage further strikes demonstrated “the deep frustration of psychiatric nurses at the lack of resolve and urgency by the Government to bring forward realistic proposals that acknowledge the extent of the recruitment and retention crisis in nursing and which will deal with the issue once and for all”.

1 Donald Trump’s political success is based on racism
2 ‘White Irish people have never had to think about this’
3 Tyrone midwife on the cover of Vogue magazine
4 Steady drop in number of Covid-19 patients in Irish hospitals, new HSE figures show
5 Sports bodies must keep electronic records of participants as training sessions resume
Real news has value SUBSCRIBE