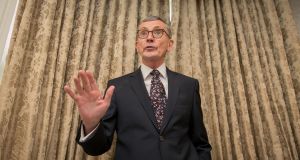 Dr Gabriel Scally: ‘The media need to back off and stop the sensationalist and inaccurate stuff.’ Photograph: Gareth Chaney Collins

The public health doctor who investigated the CervicalCheck controversy has strongly criticised the Health Service Executive for failing to introduce rules that would require patients to be told when medical mistakes occur.

Dr Gabriel Scally also criticised a “toxic mix” of political, legal and media involvement in the controversy which created a “fevered atmosphere” that ultimately put more pressure on the women involved.

He described the record of the HSE and State Claims Agency on open disclosure as “entirely lamentable”. Noting that his report published last September included a chapter on open disclosure “which was more about non-disclosure”, he said the HSE’s policy had not changed five months later.

“Is the HSE’s policy still not to have open disclosure?” he asked.

Angela Tysall, of the HSE’s quality improvement division, said the nine recommendations in Dr Scally’s report on open disclosure were being worked on proactively. The revision of existing rules was almost complete and would shortly go to the leadership team for consideration, she said.

Speaking at the 2019 Health Summit, Dr Scally described some of the reporting on the issue as “terrible, deeply misleading and wrong”.

“The media need to back off and stop the sensationalist and inaccurate stuff,” he said, adding that there were “great” health correspondents and these were needed. “Unfortunately, some of the reporting that was most wrong was done by political correspondents. It became such a political issue.”

Expressing surprise at the cost and increase in medical litigation in Ireland, he said a shift away from a medical response was necessary.

“The legal system is setting itself in opposition to what is in the best interests of patients. Their best interest is to have their problems resolved,” he said.

As part of the “toxic mix”, the legal system wanted to turn the issue into an entirely legal one, the media was “selling papers on the back of it” and politicians were also involved.

“I have never seen anything like the [Dáil] public accounts committee. Talk about a bullying culture, it’s just incredible.”

The introduction of the “should” in relation to a doctor’s duty to disclose serious events was “a death-knell to patients’ rights”, he said, “the word has to be ‘must’.”

He said making things difficult for patients is what the system seems to “indulge” sometimes, and that the more serious the consequences for a patient, the less likely they are to be told of failings in their care.