Dublin nurses’ picket line: ‘None of us want to put our patients at risk’

‘I’ve been in nursing since the early seventies and it is still a massive hard slog,’ says one 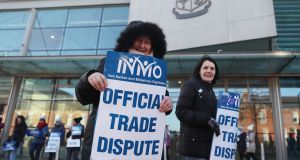 Nurses take part in their third day of industrial action over pay and conditions outside the Mater Hospital in Dublin. Photograph: Brian Lawless/PA Wire

It was difficult to hear Lucy Canning, a staff nurse from Skerries, on the picket line outside the Mater Hospital in Dublin on Thursday.

She has stepped away from her colleagues to speak to The Irish Times about the nurses’ strike but every few moments she is drowned out by the shrill honking of a car or the low pitched drone of a bus or lorry horn.

Behind her, dozens of nurses keep a steady pace despite the biting cold wind as they march in a circle, wielding placards calling for better pay and conditions in the workplace.

“I’ve been in nursing since the early seventies and it is still a massive hard slog,” says Ms Canning. “The patients are sicker now and the place is busy all the time, because we didn’t have the interventions years ago to keep people alive.

“You can’t get your tea breaks. You’re running all the time. We’ve that much paper work because we’ve no computers at the end of the beds. You’re filling in forms and chasing your tail all the time.

“Over the years it has been deteriorating and it is now at breaking point. I was on the strike in 1999 and my sister was extremely ill then. Now, I’ve a brother in law who’s up in intensive care and it’s the very same. So, you’re torn. We have families too.

“It’s very difficult to be out on a picket line when you know you should be in there minding vulnerable patients.”

When all the support from passers-by is pointed out to her, Ms Canning says she is grateful but sounds cautious. “You know, if something happens, that mood can change too,” she says. “When people are sick, all the family are emotionally drained. It takes its toll.”

The overriding message from speaking to half a dozen of the nurses on the picket line is anger that the Government has refused to sit down with them without preconditions, and a desire to get back to caring for patients.

Then, there’s the pay issue, which Aedeen Burns, a site manager from Dublin, says she is “unashamed” to talk about. “Part of this is about money,” she says. “People sort of make you feel guilty for asking for money.

“But the young ones coming through – it’s too late for me – we’re doing this for them and our profession.

“I was here for the last strike and the mood has gone downhill since then. None of us want to put our patients at risk. The Government cannot constantly insult us. We have a huge commitment to our patients but that’s emotional blackmail.”

Kyle Crotty, a fourth year nursing intern from Waterford, also says pay is a “huge issue” for him. “I’m not from Dublin and rent here is phenomenal,” he says. “It’s very hard to afford to live here. We’re currently being paid 70 per cent of what a staff nurse is paid.

“I hope to be able to afford to stay in Dublin and live here, but at the minute that’s not going to be possible.”

Crotty also says it is “stressful” to be on a picket line. “It’s not nice to be back up on the wards after being on strike,” he says. “Patients are suffering ultimately.”

Oisin O’Neill, who is also a fourth year nursing intern, says: “It’s great to see the support out here. People from Musgraves set up a whole table full of pastries and soups and teas and coffees, so the public support definitely is there.”

Eimear Kearney, who is part of the strike committee, urges members of the public to attend a demonstration in support of the nurses at the Garden of Remembrance at 12.30pm on Saturday.