'Things are getting worse': Hospitals brace for major surge in numbers 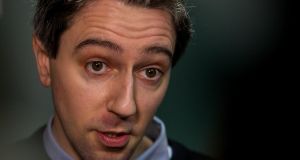 Minister for Health Simon Harris: acknowledges the number on trolleys had been very high in November and in the run-up to Christmas. Photograph: Gareth Chaney/Collins

Hospital emergency departments are bracing themselves for a major surge in patient attendances from Thursday, as new figures show 2019 was the worst on record for overcrowding.

The expected increase in attendances is driven by high flu levels and pent-up demand after the Christmas and new year holidays, though there are hopes record overcrowding may be avoided for this week.

With the start of the week traditionally the worst period for trolley numbers, it may be next Monday and Tuesday before figures peak.

The Irish Nurses’ and Midwives’ Organisation (INMO) said that nearly 120,000 patients requiring admission were forced to wait in emergency departments or on wards last year, which was the worst on record for overcrowding.

“Things are getting worse, not better” in terms of overcrowding in hospitals.

“These figures should be falling, but we’re going the wrong direction,” said INMO general secretary Phil Ní Sheaghdha. “2019 saw thousands more patients without proper beds – often at one of the most vulnerable points in their lives. Overcrowding used to be a winter problem. Now it’s an all-year problem, which gets worse in winter.”

Meanwhile, the Irish Patients’ Association has claimed that thousands of elderly patients needing to be admitted to hospital are “left lingering” in emergency departments while younger patients are given beds.

The proportion of patients aged 75 and over who have to wait more than nine hours for admission to hospital is twice what it should be, the association said in a report on the performance of emergency departments between last October and December.

Some 52 per cent of older patients had to wait more than nine hours for admission, compared to 26 per cent of patients overall, during the period examined in the report.

The performance of emergency departments over this period, compared to same period in 2018, has been “dismal”, it claims, with a significant disimprovement in overcrowding, especially for older patients. This is in spite of a big increase in funding and “no material changes” in demand and admissions.

The INMO blamed understaffing and a lack of capacity as key drivers of overcrowding. It said there were 411 fewer inpatient beds in Ireland’s hospitals today than a decade ago, despite the State having a larger and older population.

“The most frustrating part is that we know how to solve this problem: increase staffing and bed capacity, expand community care and get going with the Sláintecare reforms,” Ms Ní Sheaghdha said.

“Instead, the HSE continues to enforce its rigid recruitment controls, starving hospitals and community services of the staff they need. Our members are rightly appalled by the conditions they are forced to work and care for patients in.”

Minister for Health Simon Harris acknowledged earlier this week the number of people on trolleys in hospitals had been extraordinarily high in November and in the run-up to Christmas.

However, he said there was some cause for hope in that the flu season appeared to be peaking now and the numbers seeking treatment for the illness may begin to decline in coming weeks.

The Minister said everything possible was being done to deal with any post-Christmas spike in numbers on trolleys and that an additional 199 beds would be opened in hospitals by the end of this month.