Researchers analysed records of more than 5,800 people living with the condition 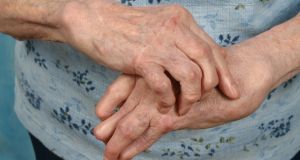 Rheumatoid arthritis, which affects around 400,000 people in the UK, is a long-term condition that causes pain, swelling and stiffness in the joints. Photograph: iStock

Doctors have discovered that drugs used to treat rheumatoid arthritis could halve the risk of patients developing dementia.

A team led by Professor Chris Edwards, of the NIHR Southampton Biomedical Research Centre, and colleagues at the University of Oxford, analysed the records of more than 5,800 people living with the condition across the UK.

They compared 3,876 patients who took disease-modifying anti-rheumatic drugs (DMARDs), particularly methotrexate, with 1,938 patients who did not.

The findings, published in the journal Alzheimer’s And Dementia: Translational Research And Clinical Interventions, found those on the anti-inflammatory medication had approximately half the risk of developing Alzheimer’s disease and other forms of dementia.

Prof Edwards said: “Although there is medication available that can temporarily reduce some symptoms or slow down the progression of Alzheimer’s disease, there is currently no cure for the condition.

“This study shows a positive link between patients taking drugs to treat arthritis and reducing their risk of developing dementia — potentially by up to 50%.

“The results we’ve seen make us optimistic that we are getting closer to better treating this neurological disease and supports further investigation in clinical trials to confirm if these drugs can be used to prevent or treat dementia.”

Rheumatoid arthritis, which affects around 400,000 people in the UK, is a long-term condition that causes pain, swelling and stiffness in the joints.

It develops when the immune system — which usually fights infection — attacks the cells that line the joints and can also affect other parts of the body, including the lungs, heart and eyes.

Prof Edwards, who is based at Southampton General Hospital, said the discovery shows that DMARDs could provide a potential new dementia treatment.

He said: “As inflammation is a characteristic feature of many other conditions, including dementia, drugs used to treat rheumatoid arthritis and reduce inflammation may also be beneficial for patients with other diseases.

“This has already been shown to be the case for treating patients with heart disease, where initial promising results are now being further investigated in large clinical trials.”

Prof Edwards and Clive Holmes, a professor of biological psychiatry at the University of Southampton, along with a team at Queen’s University Belfast led by Dr Bernadette McGuinness, have been awarded £400,000 by the Alzheimer’s Society to continue their research. – PA