Rise in number of patients waiting for eye care procedures 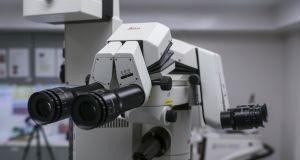 The 40,000 on outpatient waiting lists at the end of 2017 compared to 32,823 at the end of the previous year. File photograph: Anthony Kwan/Bloomberg

The number of people awaiting eye care procedures in the Republic of Ireland has increased by a fifth.

Some were waiting for treatments like cataract surgery for more than a year and half.

Forty thousand queued on lists at the end of last year, the Association of Optometrists Ireland (AOI) said, and diverting to community services could help save €32 million and speed up the process.

It said: “We have an unsustainable over-reliance on hospital ophthalmology departments that cannot and will not meet demand.”

An ageing and growing population is creating an urgent need for better organisation to significantly reduce delays, it said.

AOI chief executive Sean McCrave said cataract surgery contributed more than a fifth of those waiting and called for national rollout of the cost and time-cutting Sligo Post-Cataract Scheme.

Patients’ follow-up appointments are co-managed by optometrists in the community and ophthalmologists in hospital, axing the need for one consultation, the association said.

Mr McCrave said: “With over 20,000 cataract procedures a year, rolling out the Sligo protocol nationally would reduce outpatient cataract appointments by up to 20,000 with no capital expenditure.

“This step alone would make a significant impact to reduce unsafe delays within the public system.”

He said it was 50 per cent less expensive to treat via local optometrists than in hospital.

“We have 600 optometrists across the country who are trained, highly-skilled, have the necessary equipment and want to play a role to solve the waiting list crisis.”–PA