Children at risk as figures show decline in vaccine rates 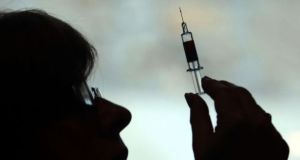 The National Immunisation Advisory Committee says vaccination is important for “herd immunity” to protect those who have not been vaccinated.

The national uptake for the meningitis vaccine and vaccine against tetanus, diphtheria and whooping cough fell last year placing higher numbers of children at risk of contracting the diseases.

The lowest uptake in the State was among young teenagers living in the Dublin North, Dublin North West, Dublin North Central and Dublin South West areas. There was also a relatively lower uptake in Galway and Kerry while the highest uptake was in Tipperary South.

The MenC vaccination along with a booster vaccine is recommended to children of 12-13 years and was introduced to schools in September 2014.

Chair of the National Immunisation Advisory Committee Professor Karina Butler expressed concern at the drop in the rate of vaccinations against meningitis and whooping cough among school children, saying that vaccination was important for “herd immunity” to protect those who have not been vaccinated.

Prof Butler told Newstalk Breakfast the uptake of the HPV vaccine had improved but that the number of school girls receiving the vaccination still needed to rise.

The vaccine protects against several strains of the human papilloma virus (HPV) which causes seven out of 10 types of cervical cancer.

Prof Butler said a lot of “good information” was available to the public which explains the benefits of vaccination for children and teenagers and said other countries had seen dramatic health results because of the HPV vaccine.

“That message is getting out there. People are responding, but not in as high numbers as we want.”