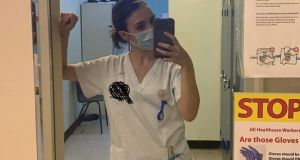 Student nurse Tessa Bock: ‘I hold the hands of patients who are so terribly ill that they can’t speak to their family. They rely on me to be there for them’

A 21-year-old student nurse has described her anger at the Government debating whether or not to allocate people in her role a €100-a-week allowance while she holds the hands of dying Covid-19 patients.

Tessa Bock says student nurses have been recognised as frontline workers since the start of the pandemic last March. “We had to quit jobs, sacrifice our health and our families’ health and dive right into the middle of it all.”

Ms Bock says she and her fellow students began working in hospitals knowing there was a risk of bringing infections home. She said she knew the work would be physically and mentally draining and that she would have to balance it with assignments and exams.

Ms Bock says in March of last year the Government gave student nurses an opportunity to work as healthcare assistants and to be paid accordingly.

“Before Christmas, while many student nurses and midwives were on placement, the Government parties voted for us not to get paid as the cases of Covid-19 were under control. Now we’re here and Ireland has been recognised as the country with the highest Covid rate in the world,” she says.

“We knew that it was for education purposes and this was a part of the course. We didn’t know that we would have to do all of this during a global pandemic, where our physical and mental health have been tested and where we’re near the verge of breaking with not one ounce of support from the Government.”

She says she laughs in disbelief and anger over the fact the Government is now discussing a €100-a-week allowance for student nurses, which she describes as a “slap in the face”.

“That’s roughly €2.80 an hour. The question is, will this really even happen?”

She admits that anxiety makes her wake during the night.

“I then leave. With the memory of the day forever with me. With the patients I’ve met forever in my heart.”