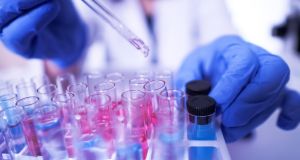 Irish scientists have discovered a molecule that can selectively kill cells of a hard-to-treat type of breast cancer, which could lead to a new therapy with better outcomes for patients.

The researchers at the RCSI University of Medicine and Health Sciences in Dublin tested different molecules to see if they could selectively kill the cells of triple negative breast cancer while sparing normal cells. They found that a specific molecule, known as BAS-2, was able to do this.

“Our aim now is to develop the small molecule into a more drug-like compound and to assess if we can harness the new function for potentially improved treatment of patients,” said Dr Tríona Ní Chonghaile, an RCSI lecturer in physiology and medical physics.

Triple negative breast cancer is a subtype of cancer which is mainly treated with chemotherapy, but up to 70 per cent of patients with this form of the illness develop resistance to treatment. About one in every eight breast cancers are triple negative and it is more common in younger women.

Triple negative breast cancer means the cancer cells involved do not have any receptors on their surface for the hormones oestrogen and progesterone, and what is known as HER2 protein. In other breast cancers they can attach to the different receptors and encourage cancer cells to grow.

Women with breast cancer might have chemotherapy before surgery to shrink the cancer and make it easier to remove, while chemotherapy after surgery can reduce the risk of the cancer coming back.

To better understand how the molecule killed the cells, the researchers confirmed it inhibited an enzyme called HDAC6. Using mass spectrometry, the researchers revealed HDAC6 plays a key role in altering energy in these cancer cells. Their findings are published in the latest edition of Science Advances.

The researchers have confirmed they have submitted a patent around this work and are seeking industry partners to further develop this treatment.

The research was funded by the Wellcome Trust Seed Award, L’Oréal-Unesco for Women in Science programme and Science Foundation Ireland’s Frontiers for the Future Programme. Researchers from the UCD Conway Institute of Biomolecular and Biomedical Sciences, and a number of US scientists also contributed to the work.