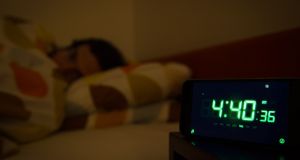 Poor sleeping patterns may be linked to increased risk of Alzheimer’s disease, a preliminary study by a group of researchers in the US suggests.

Participants in a study who were examined after a night of sleep deprivation had much higher levels of amyloid beta, which is a protein known to be a risk factor for Alzheimer’s disease, compared with when they got a good night’s sleep.

The study was a preliminary look into the area, and studied 20 healthy participants, aged between 22 and 72 years of age, over the course of two nights.

The study, led by Dr Ehsan Shokri-Kojori, was published on Monday in the journal, the Proceedings of the National Academy of Sciences.

The study found there was a “significant increase” in amyloid beta levels of participants who were sleep deprived over the course of the night.

Reacting to the research, Dr David Reynolds, chief scientific officer at Alzheimer’s Research UK, said there was “growing evidence of a link between disrupted sleep and Alzheimer’s disease”.

The study does not look at why a better night’s sleep leads to less amyloid beta levels, or what causes a peaceful sleep to clear the protein from the brain, Dr Reynolds said.

“Finding out more about how the brain processes this protein will give researchers vital insights as they work towards ways to limit the harmful amyloid beta build-up that we see in Alzheimer’s disease,” he said.

While there were a number of well-known health benefits to getting a good night’s sleep, more research was needed to look at exactly how certain sleeping patterns affected Alzheimer’s risk over the long-term, Dr Reynolds said.

Prof Tara Spires-Jones, of the UK Dementia Research Institute at the University of Edinburgh, said the research had some shortcomings. One of which was it only only examined 20 people, she noted.

The method used to measure the amount of the protein in people’s brains, accurately detects large build-ups and clumps of amyloid beta, commonly seen in the brains of Alzheimer’s patients. But Prof Spires-Jones said “less is known about whether it is an accurate label” to measure “the smaller clumps that can occur in healthy people”.