Rose of Tralee, Maggie McEldowney and Rose Escort of the Year John Slowey, along with their fellow 2016 Roses and escorts have recorded a charity single ‘It’s Time’, to raise funds for CMRF Crumlin (Our Lady’s Children’s Hospital). 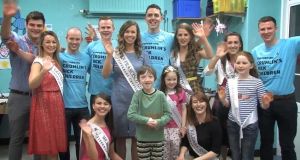 It’s Time, in aid of the Children’s Medical Research Foundation at the Dublin hospital, is performed by 129 men and women including former Roses of Tralee.

A charity single launched on Thursday night featuring last year’s Rose of Tralee entrants and their escorts will raise funds for Our Lady’s Children’s Hospital, Crumlin.

The single, entitled It’s Time, in aid of the Children’s Medical Research Foundation at the Dublin hospital, is performed by 129 men and women, including former Roses of Tralee Maria Walsh (2014) and Elysha Brennan (2015) and the 2016 Rose Escort of the Year John Slowey.

The single was inspired by the experience of Mr Slowey’s young cousin, James McGowan (5), who went through chemotherapy at the hospital to treat an aggressive malignant “Ewings” sarcoma growing in his shoulder blade.

James’s first course of chemotherapy, overseen by consultant oncologist Cormack Owens, lasted over four months, and in February 2016 he went through surgery to remove his shoulder blade.

In September last year, after a further six months of chemotherapy, James’s scans showed no sign of sarcoma.

Thousands of children are treated at the hospital every year and funds raised through sale of the song will help provide care to those children.

It will be available to download from iTunes from Friday, April 21st.