Maternity hospital will ‘respect rights of the mother’, nun says 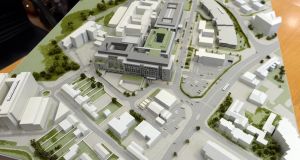 A member of the Sisters of Charity has said the new €300 million national maternity hospital on the St Vincent’s campus in Dublin will “always respect the rights of the mother and the baby”.

Sr Agnes Reynolds, a member of the St Vincent’s Healthcare Group board, said the new maternity hospital would “reach out to all creeds and backgrounds . . . and give a good service to people”.

The Department of Health’s decision to give sole ownership of the State-funded hospital to the Sisters of Charity has provoked controversy, mainly because of the congregation’s failure to meet its financial commitment to a redress scheme for victims of institutional child abuse.

The congregation owns the St Vincent’s campus, which includes one of the country’s largest public hospitals and a private hospital.

A number of protests are planned outside maternity hospitals on Saturday in opposition to the Sisters of Charity being given ownership of the new hospital. A petition against it has been backed by 30,000 people.

When contacted by The Irish Times, Sr Agnes said the redress issue was not one she dealt with in her role.

She declined to comment on concerns about the congregation’s ownership of the hospital influencing the medical care provided.

She said she “can’t make a judgment on that”.

Minister for Health Simon Harris said the Sisters of Charity would not benefit financially from their ownership of the hospital.

He said it was “not acceptable” that some orders had yet to pay all they owed to the redress scheme.

However, he said “it is wrong to conflate this extremely important redress issue” with the decision to build a “desperately” needed maternity hospital.

Mr Harris said the hospital would have “complete clinical, financial, budgetary and operational independence” and the State would in effect have a veto over any interference by way of a “golden share” held by the Minister for Health of the day.