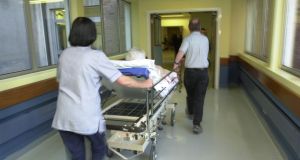 The Catholic church has played a leading role in the development of healthcare in Ireland over many years, but critics feel its direct involvement should now come to an end. Photograph: Bryan O’Brien

I thought the row over moving the National Maternity Hospital (NMH) from Holles Street to St Vincent’s was settled. So why is it in the news again?

The row over the move is over. A planning application was lodged last month and a decision is awaited from An Bord Pleanála. However, the focus is on St Vincent’s this week after the Department of Health said the Sisters of Charity would be the “sole owner” of the new maternity hospital through its wider ownership of St Vincent’s.

When was this agreed?

Under the agreement between St Vincent’s and the NMH last November, it was made clear the new hospital would be owned by a specially-created company, a subsidiary of the St Vincent’s Healthcare Group. That group – comprising the public hospital and two private hospitals – is owned by the Sisters of Charity. The board of the new operating company will have a non-St Vincent’s majority but ownership will rest with the order, though no one remarked on this at the time. The issue was raised in The Irish Times this week.

Why does this matter?

The Catholic church has played a leading role in the development of healthcare in Ireland over many years, but critics feel its direct involvement should now come to an end. In addition, there is widespread anger at the perceived failure of religious orders to pay a greater share of the costs of the redress scheme for survivors of institutional abuse.

A recent report by the Comptroller & Auditor General said the Sisters of Charity offered to contribute €5 million to the cost of the redress scheme but only €2 million of this was realised, with the last payment made in 2013.

The order is sitting on a valuable asset at St Vincent’s. The public hospital is valued at €255 million, St Vincent’s Private at €156 million and St Michael’s Hospital in Dún Laoghaire at €2 million. A carpark at St Vincent’s is worth an estimated €21 million.The group makes annual payments of €2.6 million to the Sisters of Charity.

Is that the extent of religious involvement in health?

Not by a long shot, although this involvement is largely through ownership rather than direct staff participation by priests, brothers or sisters.

For example, three Dublin hospitals controlled by the Sisters of Mercy – the Mater Hospital, the Children’s University Hospital at Temple Street and Cappagh orthopaedic hospital in Finglas – have been valued at almost €650 million.

The comptroller’s report said the Sisters of Mercy offered €127.5 million to help pay for the redress scheme but just €24.9 million of this offer was realised.

The order says it has honoured its commitments under the scheme. The property offered lost value as a result of the economic downturn, it says, but the order had always made clear its contribution was “subject to the fluctuations in value attaching to individual properties”.

Is that the extent of it then?

No, religious involvement in health is not confined to hospitals directly owned by orders. Our Lady’s Hospital for Sick Children in Crumlin is chaired by the Archbishop of Dublin, Diarmuid Martin, but ownership rests with the board of directors. Dr Martin is also the chairman of the National Maternity Hospital, which is governed under legislation passed in the 1930s, but he does not attend board meetings.

There is also a substantial religious influence in private healthcare, notably the Bon Secours group and Blackrock Clinic.