There have been 10 confirmed cases in the EU so far 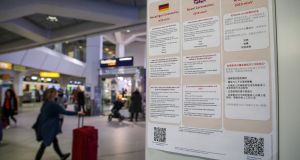 Information in German, English and Chinese about the Coronavirus at Tegel airport in Berlin. Photograph: Andreas Gora/DPA/AFP

The risk of coronavirus cases occurring here remains moderate and Ireland is well prepared for any outbreak, according to the Health Service Executive.

HSE officials said there have been no confirmed or suspected cases of the virus in Ireland, though a number of people have received precautionary care.

“You are extremely unlikely to catch novel coronavirus from someone in Ireland,” Joe Ryan, HSE national director of services, told a briefing on Thursday.

While there have been 10 confirmed cases in the EU, the likelihood of further cases being brought into Europe is moderate, he said.

At present, samples for testing need to be sent to the UK, with a turnaround of up to 48 hours, Cillian de Gascun, director of the National Virus Reference Laboratory at UCD, said. However, from next week, Irish testing would be “up and running” and results would be ready within eight to 12 hours.

HSE assistant national director Dr Kevin Kelleher acknowledged that up to 20,000 Irish people could be affected by the virus but stressed this was a “worst-case scenario” in the different models analysed. There was a “low degree of possibility” of this happening, he said.

“What we are striving to do is to try to ensure that if we do have a case here, we will minimise, and hopefully make sure there is no spread of the disease.”

All Irish hospitals with emergency departments are in a position to provide isolation facilities in the event of cases occurring here, Mr Ryan said. If there were a large number of cases, patients would be cohorted in wards, under the plans made by the health service.

Dr Kelleher said the health service has been planning “for a long time” for the kind of threat posed by the virus. An emergency planning group within the HSE has been meeting three times a week since the crisis erupted and is also engaging with the Department’s National Public Health Emergency Team.

This group held a meeting on the coronavirus earlier this week, chaired by chief medical officer Dr Tony Holohan, and was due to meet again on Thursday.

Officials advised people who think they might be affected to phone their GP first and talk to them rather than going to the surgery. The relevant criteria are respiratory symptoms within 14 days of returning from Wuhan in China, or close contact with someone with the infection.

There is no specific treatment for the new coronavirus, though many of the symptoms can be treated.

Meanwhile, flu levels in Ireland rose unexpectedly last week, as cases of the B strain of the virus became more prominent.

So far this winter, it has caused 66 deaths, most of them among over-65s, and 3,164 cases have been reported. This included 277 new cases last week. Some 104 patients have been put in intensive care.

Attendances at hospital emergency departments are also up on last week, while the number of patients waiting to be discharged rose to 624.