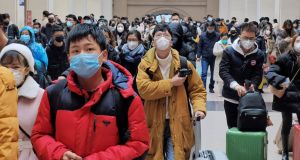 Global health bodies are warning of an increased likelihood of a new flu-like virus in China spreading to Ireland and other parts of Europe.

A World Health Organisation panel of experts has said it will decide on Thursday whether the new coronavirus, which has spread from China to several countries, constitutes an international emergency.

With 17 deaths and over 500 cases now reported in China, the European Centre for Disease Control and Prevention (ECDC) said further global spread of the virus was likely and there was now a “moderate likelihood” of imported cases being detected in the EU.

In a new risk assessment published on Wednesday, it said the risk was highest in countries with the greatest volume of people travelling to and from Wuhan, the Chinese province where the virus originated.

Three European cities have direct flights to Wuhan, including London, where passenger controls are being stepped up.

Coronaviruses, which can infect animals and people, are a large family of viruses that can cause illnesses of the respiratory tract. They are so named for the spikes protruding from their membranes, which resemble the corona around the sun.

The new virus which has emerged in Wuhan in China is closely related to the Sars virus, which killed almost 800 people around the world in a 2003 outbreak. The city has moved to prevent spread of the illness by closing down its transport networks and advising citizens not to leave the city.

It appears to have originated in a market where live fish, animals and birds were sold and, in the space of a few weeks, has spread to many parts of China. Cases have been reported in five other countries, including the US.

The ECDC also said there was “considerable uncertainty about the mortality and morbidity of this disease, and more epidemiological data is urgently needed to get a better understanding of this virus”.

Despite the ECDC upgrading the perceived threat from the virus, the Irish Department of Health, relying on a previous assessment, described the risk of a case in Europe as low at present.

There are currently no direct flights from China to Ireland, it also pointed out. Direct flights operate in the summer and a new service starts next month.

The Department of Foreign Affairs has advised Irish travellers that while the risk of contracting the disease in China remains low, their travel could be disrupted by increased quarantine and containment measures there.

It says the Irish Embassy in China will continue to monitor the situation.

According to the Health Service Executive’s Health Protection Surveillance Centre “there is much more to learn” about how the virus spreads and the severity of illnesses it causes.

“Access to the full genetic sequence of [this coronavirus] will help identify infections with this virus going forward,” it said. “More cases may be identified in the coming days, including more in countries outside China. Given what has occurred previously with Mers and Sars, it’s possible that some limited person-to-person spread will occur.”

Dr Samuel McConkey, an infectious diseases expert at the Royal College of Surgeons in Ireland, said it was likely the new virus would spread to dozens of other countries. But he stressed there was “so much uncertainty” about how infectious it was and what level of symptoms it caused and it was difficult to predict what would happen, given the limited information available so far.

Ireland recorded just one case of Sars during the 2003 international outbreak, in a patient who had returned from southeast Asia. The new virus identified in Wuhan is closely related to Sars.