Q&A: The coronavirus: what is it, where are we at now and how concerned should we be? 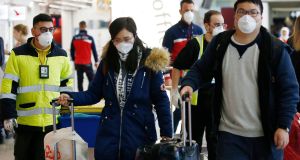 Passengers and airport staff wear masks at Rome’s international airport, in Fiumicino on Friday January 31st. European countries have stepped up their response to the virus. Photograph: Cecilia Fabiano/LaPresse via AP

The toll exacted by the new coronavirus in China has continued to mount. The number of confirmed cases is approaching 10,000, and 212 people have died from the virus. It has spread to 17 countries, though 99 per cent of cases and all deaths so far have been in China.

The World Health Organisation has declared the outbreak “a public health emergency of international concern”. Most flights to China have been cancelled and many foreign residents in Hubei province, where the virus originated, have been evacuated by their governments.

But what is a coronavirus?

Coronaviruses, which can infect animals and people, are a large family of viruses that can cause illnesses of the respiratory tract. They are so named for the spikes protruding from their membranes, which resemble the corona around the sun.

The new virus which has emerged in Wuhan in China is closely related to the Sars virus, which killed almost 800 people around the world in a 2003 outbreak. It is the seventh member of this family to emerge into the environment.

What are the symptoms?

Some coronaviruses cause mild disease such as the common cold, but others are associated with more severe conditions such as Sars (Severe acute respiratory syndrome) and Mers (Middle East respiratory syndrome). And while some viruses transmit easily from person to person, others do not.

According to Chinese authorities, the new virus can cause severe illness in some patients and does not transmit readily between people. Symptoms present about two weeks after infection.

How did we find out about this coronavirus?

Last New Year’s Eve, Chinese authorities informed the World Health Organisation of a cluster of cases of pneumonia of unknown cause detected in Wuhan City, in Hubei province. The cases were linked to a market where live fish, animals and birds were sold; it has since been shut down. A week later, a novel coronavirus (2019-nCoV) was identified as the cause of the outbreak.

Should we be worried in Ireland?

In the space of a few weeks, the virus has spread through China and cases have been reported in 16 other countries. The number of human infections stands at over almost 10,000, and is rising rapidly each day. From the information available so far, most of these victims had underlying conditions, indicating that the virus strikes mostly at those most vulnerable.

Prof Samuel McConkey, an infectious diseases expert at the Royal College of Surgeons in Ireland, says it is likely the new virus will spread to dozens of other countries. But he stresses that there is “so much uncertainty” about how infectious it is and what level of symptoms it causes it is difficult to predict what will happen, given the limited information available so far.

While only small numbers of cases have been reported outside China, worryingly, some of these - including in the US and Germany - have involved person-to-person transmission occurring outside China. With a number of cases now reported in England, the likelihood of an Irish case has increased further.

Irish authorities say the risk to Ireland is moderate at this time and emergency and health services are ready to deal with any threat.

According to the HSE’s Health Protection Surveillance Centre, “there is much more to learn” about how the virus spreads and the severity of illnesses it causes. Experts say we still don’t know how infectious the virus is; it mainly seems to affect the lower respiratory tract.

Can our health service cope with an outbreak?

As we know, levels of activity in many Irish hospitals are bordering on unsafe, making them ill-placed to deal with any new health threat. Dr McConkey says the impact of the new virus, if it turns out to be as serious as Sars was over a decade ago, could be similar to that of the surge in flu cases seen this winter. Rapid testing for the coronavirus will be available in Dublin from next week, while traditional infection control measures, such as proper hand hygiene and protective masks, would play a big role in any response.

There is at the moment no vaccine to treat this virus and no proven antiviral treatment, and patients would be provided with supportive care, such as the provision of oxygen, while recuperating. Continuing high levels of flu are a worry, should a new viral threat arrive to put even more pressure on overstretched hospitals.

What else could we be doing?

China has moved fast to place the epicentre of the outbreak under effective quarantine, affecting the lives of tens of millions of people. Most international flights to China have been grounded and land borders closed. Extensive efforts are ongoing in many countries to trace the contacts of people who were infected.

Here in Ireland, the authorities are watching and waiting. Hospitals, GPs, airports and schools have been issued with guidance for treating suspected cases. There have been calls for international air passengers to be screened, but this is unlikely for now. Isolation facilities will be made available in hospitals should cases arise.

Members of same household may exercise together, Government confirms