Taoiseach Micheál Martin has announced that the entire country will move to level 5 for a period of six weeks. The new restrictions will take effect at midnight on Wednesday and remain in place until December 1. Video: RTE 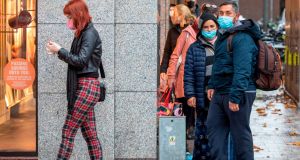 Following days of warnings from senior public health officials about the continuing spread of Covid-19, the Government last night reversed its previous stance and announced the introduction of Level 5 restrictions for the entire State for the next six weeks.

In a televised address to the country from Government Buildings last night, Taoiseach Micheál Martin said that while the restrictions of recent weeks have “slowed the spread of the virus, this has not been enough, and further action is now required”.

The decision was announced after a Cabinet meeting arranged at short notice yesterday gave its approval for the move, although not without some dissent from Ministers. The measures come into place tomorrow night.

Under the Level 5 plan announced last night, schools and childcare facilities will remain open, as will construction sites and manufacturing, but non-essential retail businesses and services such as hairdressing will be forced to close, plunging tens of thousands of people into unemployment and costing the exchequer hundreds of millions of euro in lost taxes and in welfare payments.

People will be told not to travel more than 5km from their homes, and there will be fines for those who break the rules.

Teachers’ unions last night expressed concern about keeping the schools open. But Mr Martin said the advice was that schools are safe places for children. Government sources privately fear that the unions will not co-operate on the new plan.

Last night’s announcement came after the Government resisted calls from the National Public Health Emergency Team (Nphet) and chief medical officer Dr Tony Holohan in the past fortnight for a move to Level 5, the most severe stage of the Government’s framework of Covid restrictions. Cabinet sources said that key to the abrupt change was the support of Tánaiste and Minister for Enterprise Leo Varadkar for the new restrictions. Previously, Mr Varadkar had been among those who were reluctant to introduce a new lockdown, and he was very critical of Nphet’s approach to the issue.

However, Mr Varadkar is said to have changed his mind after a series of warnings from public health experts about the increasing prevalence of the virus in recent days.

Last night, a further 1,031 confirmed cases of Covid-19 reported by Nphet brought the total number of coronavirus cases in the State to 50,993, less than eight months after the first case of the virus was recorded in Ireland. As of 2pm yesterday, 298 Covid-19 patients were in hospital, including 34 in ICU. There were 20 hospitalisations from the disease in the past 24 hours. But there was significant dissent within Government over the latest move. Although they acquiesced in the decision reached by Mr Varadkar, Mr Martin and Green Party leader Eamon Ryan, the Ministers responsible for the economy and public spending, Paschal Donohoe and Michael McGrath, are understood to have opposed the move over the weekend, only accepting the decision when the party leaders pushed for it yesterday.

Minister for Health Stephen Donnelly was also sceptical of the need to move to Level 5 over the weekend, though he told RTÉ last night he was “convinced” of the need for the move.

Minister for Foreign Affairs Simon Coveney had also questioned the need for a six-week lockdown, while other Ministers suggested a three- or four-week period would be sufficient. Ministers eventually decided the lockdown will be reviewed after four weeks.

Party leaders were alarmed by the warnings that infection numbers could spiral over the coming weeks. A full six-week lockdown will mean new cases of about 50-100 per day as the Christmas season got under way, Nphet told Government in a letter last week. However, failure to impose a full six-week lockdown would mean about 1,000 cases a day could still be expected in the middle of December, Nphet warned.

Failure to enforce a full lockdown for six weeks would mean the disease would effectively be out of control over the Christmas period, Nphet suggested.