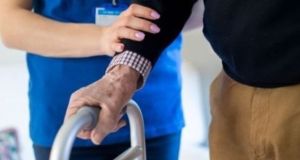 Raising the frequency of serial testing of staff in nursing homes from fortnightly to weekly would double the number of nursing home tests to about 30,000 a week. Photograph: Getty Images

The National Public Health Emergency Team (Nphet) is to consider an increase in the frequency of testing in nursing homes from fortnightly to weekly due to rising coronavirus cases.

Raising the frequency of serial testing of staff in nursing homes, which is designed to catch asymptomatic coronavirus infections to prevent outbreaks among vulnerable residents, from fortnightly to weekly would double the number of nursing home tests to about 30,000 a week.

Nphet emphasised the importance of continuing the fortnightly serial testing “as a proactive protective measure” in a letter last week to Minister for Health Stephen Donnelly.

The team told the Minister that it had asked the HSE to finalise proposals “for sustainable approaches to testing across a number of priority areas including vulnerable groups living in congregated settings, health workers in acute settings and food processing facilities”.

The serial testing is due to be discussed further at Nphet’s meeting today with the possibility of enhanced testing in care facilities, one of the settings most vulnerable to the worst effects of the virus and a sector that accounts for more than half of the State’s Covid-19 deaths.

The discussion takes place against the backdrop of an increasing number of outbreaks in nursing homes with 11 reported last week, bringing the number of open outbreaks to 40.

New HSE figures, obtained by The Irish Times, show a further increase in the positivity rate of asymptomatic staff tested in nursing homes under the serial testing programme, reflecting the increased risks of workers bringing the virus into long-term residential care facilities.

The latest data shows a coronavirus positivity rate of 0.4 per cent, or 244 positive cases, among 60,552 swabs taken of nursing home staff since the start of September in the third cycle of testing.

The positivity rate has been rising steadily, from 0.33 per cent a week ago, 0.19 per cent in the August cycle and 0.13 per cent in July. This mirrors increasing community transmission of the virus as the number of infections in the general population have increased since the summer.

The State’s chief medical officer, Dr Tony Holohan, has said that it will be impossible to keep the virus out of the nursing homes if there is widespread community transmission, which he said poses an “existential risk” to people in nursing homes and older age groups.

Tadhg Daly, chief executive of Nursing Homes Ireland, the representative group for private nursing homes that make up 80 per cent of the sector, asked the HSE last week whether weekly testing of nursing home staff should be carried out in areas where infection rates are high.

“It is something we would like to see kept under constant review. If the virus is higher in a particular region, then nursing homes and the system needs to respond promptly,” he said.

In the serial testing, if two nursing home staff test positive, then the care facility is referred to the HSE’s public health official for outbreak testing of all staff and residents of the home.