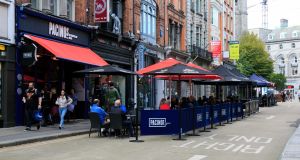 Suffolk Street in central Dublin: the rate of new cases in the capital is slowing after three weeks of Level 3 restrictions. Photograph: Gareth Chaney/Collins Photos

Regional restrictions rather than a short, strict national lockdown may be the next step taken by the Government if action is needed to halt sharply rising Covid-19 case numbers.

Taoiseach Micheál Martin yesterday urged the public to change their behaviours so “we can make Level 3 work, protect lives and livelihoods” and stop Covid-19 spreading.

He said there was “some evidence” Level 3 had an influence for the better in Dublin and across the country it can also “have an impact”.

Senior Government figures stressed there were no immediate plans for a short lockdown, known as a “circuit breaker”, despite the deteriorating coronavirus metrics over the weekend.

Mr Martin also questioned the workability of the measure. “The idea of just locking things down for two weeks and being able to come back as normal, I’m not sure that’s a runner,” he said.

It is anticipated that if increased Covid-19 restrictions are introduced they may first be limited to counties with higher rates of the disease, such as Donegal. “There is every possibility that the next step will be regional,” one Government source said.

Public health officials are to closely monitor the impact of the nationwide move to Level 3 of the Government’s phased Covid-19 plan has had, with the first indicators of whether the measures are stabilising the situation to be seen by the end of the week. The whole State joined Dublin and Donegal on Level 3 restrictions for three weeks from last Tuesday.

There is some encouragement that the rate of new cases in the capital is slowing after three weeks of Level 3 restrictions, another Government source said.

Of the additional cases, 226 were located in Dublin, 77 in Cork, 64 in Galway, 56 in Donegal, and 48 in Meath, with the remainder spread across the country.

This follows 1,012 new cases reported on Saturday, the highest daily total since the height of the pandemic in mid-April.

He reiterated it was vital that people limited their social contacts to an “absolute minimum,” and followed the other public health guidelines. On Saturday he said he was very worried about the numbers and how quickly they are deteriorating.

Senior Health Service Executive officials are to meet on Monday to discuss the pressure on the hospital system and intensive care units across the country.

There were 39 hospital intensive care beds vacant at the weekend, and 30 patients in ICU with Covid-19 – a key metric watched by Nphet. There were also 204 Covid-19 positive patients in hospital, a figure that has been steadily increasing in recent weeks.

The Government also played down another possible measure on Sunday as Minister for Health Stephen Donnelly confirmed the school midterm break “is not going to be extended”, yesterday.

“We have emerging and mounting evidence of the educational cost” to children of school closures, he said.

The Minister was reacting to reports on Friday that the midterm break in schools may be extended in October .

Meanwhile, in Northern Ireland the Executive is to meet on Monday and will consider the need for further restrictions after almost 2,000 new cases of coronavirus were identified over the weekend.

A further 1,066 cases were reported by the North’s Department of Health on Sunday, and 902 on Saturday.

Elsewhere medical scientists, who include those involved in testing for Covid-19, have warned that there is an increasing mood for industrial action over pay issues.

The chairman of the Medical Laboratory Scientists Association (MLSA) Kevin O’Boyle said there was “palpable anger and unrest in laboratories all across the country and the likelihood of industrial action is growing”.