Cervical cancer could be eradicated in Ireland within a generation 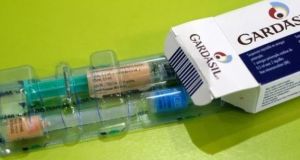 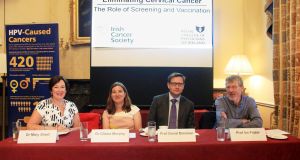 Irish doctors believe cervical cancer can be eradicated here within a generation if we switch to primary HPV screening of women and vaccination.

The human papilloma virus (HPV) is directly linked to cervical cancers and testing for its presence before examining cell structures taken in smear tests would have dramatic effects on treating the disease, they say.

An Irish Cancer Society (ICS) event on Tuesday heard the move would lead to 20 per cent more pre-cancerous abnormalities being detected, and a 30 per cent reduction in related cases and deaths.

The current emphasis is on liquid cytology smear tests to check for abnormalities, followed by testing for HPV.

A move to primary HPV testing was recommended by the Health Information and Quality Authority (Hiqa) in a report last year.

It is expected that this would improve the detection rate of pre-cancers, including some that smear testing does not pick up on.

However, while the change in approach is championed by cancer specialists, it comes with significant challenges and will require financial investment and training.

HPV, passed through sexual activity, is very common in the general population and, in the vast majority of case, harmless.

Testing women for its presence therefore would lead to a much greater number of cases of potential cancers – an approach that could heighten anxiety among patients and bring at least an initial spike in the need for follow-up testing.

The ICS stressed its introduction would require a complementary information campaign on its benefits and limitations.

Speaking at Tuesday’s event, Prof Ian Frazer, whose work helped develop the HPV vaccine, said: “I can give this talk in one sentence because I can say that cervical cancer is caused by infection of the virus . . . we have an effective vaccine.”

If the entire population of the world was immunised, he said, cervical cancer would disappear within a lifetime. However, it must be accompanied by screening as a very small cohort of people will not respond to the vaccine.

A vaccination programme in Australia, where Prof Frazer works, has led to a 95 per cent reduction in new HPV infections among that age group of recipients. Boys are also vaccinated due to other HPV-related conditions.

The Department of Health said Minister for Health Simon Harris was committed to the introduction of primary HPV testing later this year. “He has ensured extra resources are being deployed to work intensively on this,” it said.