Court poor box will be ‘done away with’, says Flanagan

Minister for Justice is unhappy with how poorbox is being used. ‘I intend to reform it’ 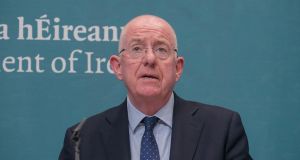 Minister for Justice Charlie Flanagan is unhappy with the way the poor box system is being used in the courts. Photograph: Collins

Minister for Justice Charlie Flanagan is to bring in legislation before the end of the year “do away” with the court poor box.

Mr Flanagan told the Dáil: “I’m not happy with the system. I do intend to do away with it.”

Independent TD Mattie McGrath expressed concern about the financial impact on charities which benefitted from the use of the court poor box.

The Tipperary TD said “the poor box is being used with great ingenuity by many justices up and down this country.

“And now I hear you’re going to disband this service. Some charities, Jack & Jill (Foundation) for one get €50,000 roughly per annum and the valuable work it does.”

He said defendants “don’t get a conviction and it’s a good process that has served the State well and used widely by most justices up and down the country.”

Mr McGrath said “now the money will just go into central funds and be lost and the charities will be the one to lose and the sick children, the ones from Jack & Jill will be the ones to lose.”

But the Minister said he had previously expressed that he was not happy with the system. “I repeat my unhappiness with the manner in which the court poorbox is being used in the courts. I intend to reform it,” he said.

“ I won’t have legislation ready in time for this session but it is an issue I look forward to bringing forward before the end of the year.