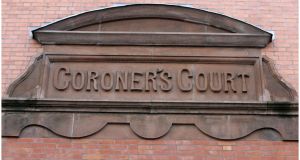 A total of 106 postmortems were carried out in April, compared to 143 in the same month in 2019, according to the Dublin District Coroner. Photograph: Dara Mac Dónaill

The remains of just five people who have died with confirmed Covid-19 have been the subject of postmortem examinations, according to official figures.

The number of autopsies being carried out generally this year has fallen as the epidemic has spread, despite an increase in the overall number of deaths.

The Dublin District Coroner is directing that autopsies be performed in circumstances where they are mandated by law, it told The Irish Times. Five such autopsies on Covid-19 deceased were carried out in Dublin in the first four months of the year, the office said.

None has been performed in Cork University Hospital (CUH), the other location equipped to handle autopsies on infectious bodies.

By Sunday night, there were 1,458 Covid-19-related deaths. There is no county breakdown of deaths, but half of all cases have been reported in Dublin.

In other countries, autopsies have uncovered new research information about how the virus causes serious illness in some patients. They have also revealed earlier cases of the disease than had been officially recorded.

A total of 106 postmortems were carried out in April, compared to 143 in the same month in 2019, according to the Dublin District Coroner.

The number of online death notices in April – a preliminary indicator of excess mortality – almost doubled compared to the same month in 2019.

A spokesman for CUH said “as of yet we have not yet needed to perform a postmortem on a deceased person with confirmed diagnosis of Covid-19”.

The overall number of postmortems carried out in Cork in the first four months of the year was 252, down from 291 in the same period of 2019, despite the increase in deaths.

According to CUH, with the onset of Covid-19, an arrangement was made with the office of the State pathologist, the coroner and pathology staff that “each case would be adjudicated on its own individual merit”.

As Covid-19 positive cases remain infectious for a period after death, the only two locations where autopsies can safely be performed are Dublin City Mortuary and CUH mortuary.

Postmortems are sometimes performed in the larger hospitals but these do not have the facilities to cater for Covid-19 examinations.

Last month, Dublin City Coroner Dr Myra Cullinane warned not all Covid-19 deaths were being reported as required by law.

She wrote to medical staff in hospitals and other locations who are responsible for completing death certificates, saying they must comply with the requirement to report “any death in the context of proven or suspected” Covid-19 to her office.

In March, the coroners’ service ruled that postmortems on people who had died with coronavirus would not be necessary in most cases, unless there were “other circumstances present”.