Contact tracing is key to stopping Covid-19, so how well does it work in Ireland?

With a virus that spreads at pace, experts are concerned at delays in the proces 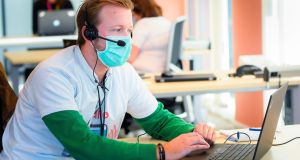 At the weekend, South Korea closed recently reopened bars and clubs after a new cluster of Covid-19 cases emerged from the nightlife area of Itaewon, reportedly after one person who visited several nightclubs there subsequently tested positive.

With up to 1,500 potential contacts, and more than two dozen cases linked to the nightclubs, the Seoul case shows how fast the virus can spread without social distancing.

Controlling that spread, in the State as in South Korea, requires systems to intercept the virus and break the chains of transmission through which a case becomes a cluster, and then an uncontrolled outbreak. This is done through testing and contact tracing – and the most important element is speed.

“The five-stage process – sampling, testing, communication to a positive case, contact tracing and contact quarantine – all needs to be done in a 72-hour window,” says Dr Tomás Ryan, assistant professor in Trinity College Dublin’s school of biochemistry and immunology.

But how does the process work – and how well does it work – in the Republic?

Some 1,700 contact tracers have been trained. So far, the demand for contact tracing has been relatively subdued. At any one time, a fraction of these tracers have actually been needed. On the week ending May 2nd, an average of 70 were working. On its busiest day, which saw 1,400 new cases, the HSE says 292 people carried out 5,000 calls.

Those on the frontline have seen multiple issues. In some tracing centres, technical issues delayed work starting; by the time the work began, tracers were working on cases where samples were taken about two weeks previously, although this situation has improved. According to documents seen by The Irish Times, some civil servants who were nominally redeployed to this area in the middle of March are yet to do any contact tracing, and have been told there is no definitive timeline for reassignment. One tracer said that promised training materials have not materialised, while another said shift numbers have been cut down because the volume of calls being made is so low.

The HSE says that once a positive test is identified, its details are uploaded to the contact tracing system within 90 minutes, but those involved in the system have concerns. Mary Codd, professor of epidemiology and associate dean of public health in UCD, was involved in setting up and running a testing centre at the university.

“To get to the point of being able to contact someone in a truly timely fashion, there is still work to be done. It’s not timely enough yet,” she says. It currently takes too long to get swabs from sampling centres to labs, and also the gap between results coming from labs and being made available for contact tracing is too wide, she says. “There has to be considerable attention paid to that interval,” she adds. The process, which is run by the HSE, is “too lengthy”. She often has to scale back the number of contact tracers at her centre significantly due to a lack of cases. “We frequently, based on the information and data available, have to scale that back to 20 people or even 10 people.”

Some senior medics and experts are also concerned about the functioning of the system. One medic relates the story of a colleague who was contacted by five different people to communicate their diagnosis and ask about contact tracing, a situation the medic describes as “chaos central”.

On Sunday, HSE chief executive Paul Reid said the average time to get a test result is 2.4 days. Currently, the HSE claims the average time for contact tracing in what it calls a “non-complex case” is within 36 hours, and it this week expects to implement a target of completing contact tracing within 24 hours for approximately 80 per cent of cases.

The above suggests a relatively simple case can optimistically expect to complete the entire process within about 3.5 days. Complex cases, it seems, may take longer, but the HSE did not supply figures on exactly how long. With a virus that spreads at pace, and invisibly, experts are concerned.

“If it is two to four days for testing and another two to three days for tracing, that won’t be effective,” says Dr Ryan. “Research has shown that once you pass five to six days, you’re having a negligible impact on transmission of the virus.”

A smartphone app, designed to aid the contact tracing process, was initially billed as “a key element” and “a vital part” of the Irish response. However, the emphasis on that aspect has been dialled back as the timeline for the app has slid out from early April to early May, to the end of this month – not to mention as concerns over privacy and its effectiveness have mounted. On Sunday, Mr Reid was casually saying it “plays a role – not a major role”. The final role, and importance, of the once-vaunted app now appears to be an open question.

On Sunday, Mr Reid indicated that in the months and weeks ahead, testing and tracing will move from “a kind of a wartime model” towards “a future model of operation” – a scoping report on which will be commissioned this week.

Much depends on its success.