Coronavirus: 12 more people die of Covid-19 in the State 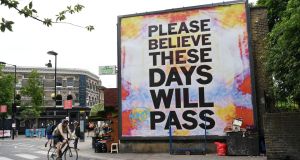 A man cycles past a sign near Broadway Market in London. Photograph: Kirsty O’Connor/PA Wire

Twelve more people have died of coronavirus in the State, as the number of confirmed cases increased by 236 on Sunday.

This brings the total number of Covid-19 related deaths to 1,458, according to the National Public Health Emergency Team (NPHET).

There have been 22,996 confirmed cases of coronavirus in the Republic. The latest figures indicate the rate of growth in infected cases is holding steady at around one per cent per day, with Sunday’s growth slightly above that level.

The overall figure is a slight increase on Saturday, when 219 new cases were confirmed.

As of midnight on Friday, 57 per cent of cases in Ireland are female, while 43 per cent are male. The median age of confirmed cases is 49 years, and 2,986 cases - or 13 per cent - have been hospitalised.

Of the hospitalised cases, 383 have been admitted to intensive care. Some 6,771 cases are associated with healthcare workers. Dublin has the highest number of cases at 11,068 (49 per cent of the total), followed by Kildare, with six per cent (1,324) and then Cork, with 1,207 cases (five per cent).

Data released by the Health Service Executive (HSE) on Sunday shows the total number of confirmed or suspected cases of Covid-19 in the State’s hospital system was 739 at 8pm on Saturday evening.

The rate of new admissions of confirmed Covid-19 cases continues to decline , with Saturday morning’s figures showing a 7.9 per cent decrease on the previous day. There are a total of 1,242 vacant general care beds across the hospital system, and 161 vacant critical care beds. Some 94 confirmed or suspected cases of Covid-19 are in critical care units, and 61 confirmed or suspected cases are currently ventilated.

Earlier on Sunday, HSE chief executive Paul Reid said testing capacity in the State is now at 15,000 per day. He said the turnaround time for tests is 2.4 days on average, and that there are 3,010 healthcare workers currently on Covid-19 related leave.

Speaking at the weekly HSE press briefing, Mr Reid said the change in definition on the use of face masks by all healthcare workers has meant the daily use of face masks across the health system has gone from 200,000 to 1.2 million, leaving the HSE with a requirement for nine million face masks a week.

Mr Reid told reporters that the delivery of a further 120 million masks had just been finalised, with delivery over the coming weeks from South Korea through contacts made in the country and following a call last week by Taoiseach Leo Varadkar with South Korea’s president Moon Jae-in.

Explaining the significant scale of the order, Mr Reid said that nine million face masks would, if stacked in pallets, would be 11 times higher than the Liberty Hall building in Dublin.