Man tasked with leading US out of valley of death appears removed, shirking responsibility 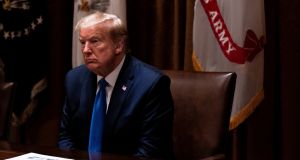 Donald Trump: is despicably turning the dead into the undead, trying to figure out how to claim they weren’t lost. Photographer: Anna Moneymaker/The New York Times/Bloomberg

This is not a good time for vampires. Or bats. That’s disorienting for me because, as a lifelong aficionado of vampires, I have a big collection of bat T-shirts, Victorian bat pins and vampire books and movies.

Once, the imagery was hot: Batman with his bat signal; Brad Pitt and Tom Cruise slinking around New Orleans in Interview With the Vampire; Sookie Stackhouse from True Blood naked and drenched in blood on the cover of Rolling Stone; the Kristen Stewart and Robert Pattinson sensation in Twilight (Their broken romance was a favourite subject of Donald Trump’s early tweets.)

But now the bat is a global villain, sparking memes like, “Whoever said one person can’t change the world never ate an undercooked bat” and rants like Bill Maher’s denunciation of Chinese wet markets because eating bats is batty.

Vampires were conjured centuries ago in part as a response to plagues passed from animals to humans, when the afflicted turned to the supernatural to explain the many terrors. According to Trump biographer Michael D’Antonio, the president’s own grandfather, Friedrich Trump, a German immigrant, might have died of the Spanish flu, contracted as he walked around Queens looking for real estate properties in 1918.

Many struck by coronavirus describe the awful sensation of the virus receding during the day only to viciously strike once the sun sets. As Chris Cuomo put it: “The beast comes at night”.

The metaphor is also cropping up as members of the Trump dynasty are exposed as leeches. A podcast by the Daily Beast this past week was titled Jared Kushner, Our First Android Vampire President. David Axelrod wrote a New York Times op-ed with David Plouffe advising Joe Biden, whom they dubbed “the Man in the Basement”, to juice up his campaign.

“Trump is like a vampire!” Axelrod told me, adding a salty expletive. “You’ve got to drive a stake right through his heart. He’s going to keep coming. There’s nothing he won’t do. Even in this environment, you can’t count on him losing.”

Now the monstrous virus has invaded the Oval Office. Both the president’s valet and a Mike Pence staffer, Katie Miller – wife of Trump advisor Stephen Miller, who looks like he hasn’t seen daylight in decades – have succumbed. Yet just a few days ago Axios reported that the president and some top aides were questioning the high death toll.

Trump has always been fixated on numbers and perfectly willing to fake them – his billions, his inaugural crowd, even the number of storeys in Trump Tower – and he knows the number of dead, now surpassing 77,500, could be the death knell of his campaign.

So he is despicably turning the dead into the undead, trying to figure out how to claim they weren’t lost. His talent as an escape artist has run out because he’s up against an even more amoral, vicious enemy. Microbes don’t give a damn about Trump’s fake narrative and suppression of the facts.

When the new Trump press secretary, Kayleigh McEnany, was asked on Friday what the plan was for reopening, she replied that we must trust the president to open safely because he is relying on the data. Risible.

Trump’s unmoored assertions add up to a horror story, from his failure on testing to his advice to inject bleach to encouraging rowdy protesters and impatient states to “LIBERATE” from the government’s own guidelines to perpetrating the suicidal idea that we have to choose between public health and the economy when they are the same thing.

When Mike Pompeo tried to push the 2020 re-election line demonising China, saying there is “enormous evidence” that the virus escaped from a lab in Wuhan, even intelligence and senior officials pushed back.

The man who is trusted to lead America beyond the plague, Anthony Fauci, dismissed it, reiterating with near certainty that the virus originated with a bat and jumped species.

Trump has sidelined the nonpareil Fauci and, no doubt consumed with jealousy and irritated by his honesty, would like to get rid of him. He barred the National Institutes of Health scientist from testifying before the House this month because the committee has “every Trump hater” who “want our situation to be unsuccessful, which means death”.

Wallowing in petty insults, vindictiveness and public relations piffle even in such a tragic season, the president tried to shut down the pandemic task force as the pandemic is still ravaging the country until alarmed associates intervened. The White House scuppered the safety guidelines the Centers for Disease Control and Prevention wanted to put out, for fear they would hamper the reopening.

Trump has been leaning into his son-in-law, the pallid non-entity. Kushner is like Renfield, the “zoophagous maniac” in Bram Stoker’s Dracula who eats flies and death’s head moths and does the vampire king’s bidding.

For two of the most urgent missions in American history – hunting for supplies and a vaccine – the president, who is always accusing Joe Biden of nepotism, relied on nepotism and favouritism.

As the New York Times reported the other day, Kushner messed up the desperate search for masks, gloves and ventilators this spring, heading a group of volunteers that prioritised tips from those with Trump connections, putting them on a VIP list, like a lead on N95 masks from a former Apprentice contestant who runs Women for Trump.

D’Antonio said that Trump was always preoccupied with death. When he was young, he was convinced he would die before 40. The early death of his alcoholic older brother, Fred Trump, was his formative experience. He regards every loss or humiliation as a small death.

One of Trump’s favourite songs is the morbid Peggy Lee ballad Is That All There Is? Yet now that it is his duty to lead us out of the valley of death, Trump appears removed, shirking responsibility and deflecting blame. He’s the world’s worst empath.

As the president tries to prematurely yank the country back to work, he seems less focused on the real suffering than reviving his precious stock market. Maybe Trump doesn’t seem real to Trump, either.

So I must ask, Mr president, is that all there is, to live and let die? – New York Times