Bundesliga pressing ahead with restart despite Dresden quarantine 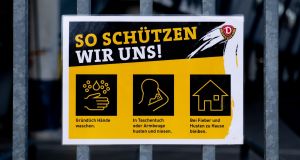 A manual for protection reading ‘That’s how we protect ourselves’ on the fence at the Rudolf Harbig Stadion, stadium of German second Bundesliga side Dynamo Dresden. Photo: Filip Singer/EPA

The Bundesliga is keen to press ahead with plans to restart the season for the top two tiers next weekend, despite Dynamo Dresden’s squad being quarantined for two weeks.

Dresden’s players were sent home after two tested positive for coronavirus. This means the second tier club cannot play their first two games of the restart – against Hannover on May 17th and against Fürth the following weekend.

However, speaking to ZDF, the Bundesliga chief executive, Christian Seifert, said that what had happened in Dresden, where the local authorities told the club the players had to be quarantined, did not mean the top two divisions could not kick off on Saturday May 16th.

The delay for Dresden means they could enter the fray on the weekend of May 26th and 27th, although that would lead to them immediately playing three games in one week. “It is only hypothetical to talk about what would happen if the same thing happens to other teams,” Seifert said. “A lot of teams are being tested for the third of fourth time and now we have the special case of Dresden.

“Just because they have to go into quarantine for 14 days does not mean we have to question the continuation of the second division. There is a number [of postponed games] that means it is not possible to finish the season but what that number is I cannot say. That depends on how many teams are affected and how much time is left to finish the season.

Seifert added there was enough leeway in the scheduling for Dresden to play all their remaining games. – Guardian