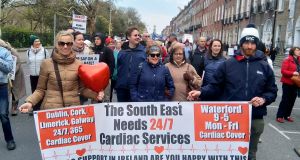 Protesters march in Dublin over cardiology services in Waterford.

The protest sought to raise the lack of interventional care at UHW, where a permanent catheterisation lab operates from 9am to 5pm Monday to Friday. A temporary cath lab at the hospital offers a diagnostic service but cannot treat patients.

Demonstrators gathered at the Garden of Remembrance and marched to Kildare Street to protest outside the Dáil.

“There’s the symbolism behind it [marching to the Dáil on a Saturday]. We’re outside an empty Dáil because the Dáil is empty on Saturdays and so is the cath lab in the southeast,” said Independent councillor Matt Shanahan, who is chairman of campaign group Healthcare Equality for the South East.

He added it was “wrong” that UHW is the only designated national cardiac centre which does not receive funding for a 24/7 service.

GAA figures including John Mullane and Brian Cody lent support to the campaign ahead of this weekend’s march.

January saw 10,000 people turn out to protest in Waterford city about the lack of a 24/7 service.

Paul O’Toole said he had travelled to Dublin from Waterford city to help press the case: “There’s no service there at weekends. I mean, who wants to die on the way down to Cork?”

While Minister for Health Simon Harris has approved a second cath lab for UHW, campaigners continue to hold out for a full cardiology service.

The existing lab’s current operating hours are set to be expanded to an 8am to 8pm weekday service.

A national review of cardiology services is due to be published later this year.

The campaign included representatives from across the political spectrum.

“The country is still waiting for this government to give us an effective health service,” said Tom Creedon, secretary with the Waterford Council of Trade Unions.

“We’re here on a march because for 75 per cent of the time the cath lab is closed.”

A placard reminded protesters of figures from a Prime Time Investigates programme, which showed that 98 per cent of patients who need to be transferred to cardiac centres outside the region failed to make it within 90 minutes, a time period considered the ideal time to perform a life-saving procedure on a patient.

Jenny Pheasy, who five years ago narrowly made it to the cath lab on a Friday evening before five o’clock after suffering a heart attack, said, “Simon Harris is putting the lives of people in danger”. “We in the southeast are not second class citizens and do not deserve a second class service,” she told the crowd.

1 Miriam Lord: Minister for Agriculture tries to get himself out of the manure
2 Coronavirus: One more death and 24 new cases reported in the Republic
3 How fraudsters used lockdown to lure Irish victims into boats and caravans scam
4 Passenger who promised driver a ‘few quid’ after crash awarded €10,000
5 Taoiseach rules out united Ireland referendum as ‘divisive’
Real news has value SUBSCRIBE