Outbreaks of coronavirus in private households double in a week 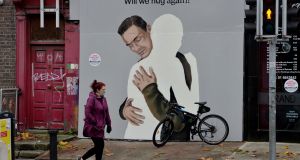 Outbreaks of coronavirus infections almost doubled in the second week of November with the number of private household outbreaks more than doubling, official Covid-19 statistics show.

There were 1,057 outbreaks of the disease recorded in the week to November 14th, an increase from 572 in the previous week, due mostly to the sharp rise in the number of infections in households.

There were 954 outbreaks in households, up from 443 for the previous week. Workplace outbreaks rose from 15 to 20, while outbreaks linked to school children or staff fell from 24 to 10.

There were 4,992 open outbreaks at the end of the second week, up from 4,202 a week earlier. A total of 8,311 outbreaks of disease have been recorded since the pandemic began in March.

An outbreak remains open until 28 days have passed without a new infection being detected.

The number of coronavirus-related deaths passed 2,000 on Wednesday, as 12 reported deaths pushed the death toll linked to the disease in the State to 2,006 since the first recorded death on March 11th.

The National Public Health Emergency Team reported a further 379 confirmed cases of the disease on Wednesday, bringing to 69,058 the total number of cases in the Republic.

Members of Nphet are meeting on Thursday to discuss the country’s exit from Level 5 restrictions, which are due to expire on December 1st. Senior officials are said to have clashed with Chief Medical Officer Dr Tony Holohan during a meeting on Wednesday as efforts to draw up a plan to exit the lockdown and manage the pandemic over the Christmas period continue in Government.

According to three sources with knowledge of the meeting, senior officials emphasised to Dr Holohan that the Government – not Nphet – would make decisions about easing the lockdown and what restrictions would be in place over Christmas.

Latest figures show that there are 290 people in hospital with confirmed cases of the disease on Thursday morning with 20 admissions to hospital and 23 discharges over the previous 24 hours. There were 33 people in intensive care units on Wednesday night.

This is down from a high of 44 during the second wave of the disease at the end of October. The number of Covid-19 cases in ICUs peaked at 155 during the first wave of infections in April.

Geographically, coronavirus hospitalisations outside Dublin mirror where cases are highest in the country as a proportion of the population.

Donegal has the highest incidence rate over the past fortnight with 295.9 cases for every 100,000 people followed by Limerick with 237.

University Hospital Limerick had the highest number of confirmed Covid-19 cases on Wednesday night with 38 cases and there were six people with severe coronavirus infection in its ICU.

Letterkenny University Hospital in Donegal had the next highest number of cases in hospital with 36 but had just two people in the hospital’s ICU, jointly the fourth highest number in ICUs.

There were nine new outbreaks reported in hospitals in the second week in November, down from 11 the previous week, while nursing home outbreaks increased from three to six.

There were 221 out sick from University Hospital Limerick due to infections or as a result of being a close contact of a case, up from 161 last week.

There were 133 staff off work at Letterkenny University Hospital, of which 49 had Covid-19.

Prof McConkey said that while recent figures were not as good as June, they were better than October and if figures continue as they are that would allow for a gradual reopening of the retail sector on December 1st.

Going to Level 3 when Level 5 restrictions are lifted will keep the country in a holding pattern with regard to Covid-19. Going to Level 3 will not fix the problem, but it will stop the virus from getting out of control, he said.

The country may also need to consider other approaches in an effort to reduce Covid cases, he said. Such measures would include mass testing and controlling out breaks in businesses, hostels and other crowded settings where there are vulnerable people.

“These basic problems haven’t been solved,” he said.

Moving to Level 3 on December 1st would allow the gradual reopening of the retail sector, he added. Toy stores could open and operate like supermarkets did during the first lockdown earlier this year with supervised queueing and no entry without masks, he explained.

Prof McConkey said that given current Covid figures it was unlikely that the retail sector would open before December 1st as had been suggested by some retails groups.

Speaking later on RTÉ radio’s Morning Ireland Prof McConkey said that he remained optimistic about how effective the Level 5 restrictions could be, pointing out that the most recent data from Nphet was from two weeks previously which included the Halloween period when people were attending parties.

“Level 3 is a temporary way of keeping things level.”

The virus would be easier to control if numbers were lower which would allow cases to be traced “meticulously” and prevent onward transmission, he added.

Pop-up testing centres in areas where there is an outbreak plus access to GP care for zero hours contract workers would also help.

Allowing people who live in crowded conditions access to a safe place where they could isolate for 14 days would also prevent further spread of the virus and was a safe option, said Professor McConkey.

“We need an integrated hard control plan,” he added. A world class public health service which was well staffed and well resourced would control outbreaks.

The three sectors facing the most challenges by Covid were aviation, retail and hospitality, he said. The aviation sector was going to be in difficulty “no matter what happens.”

It would be possible for the retail sector to reopen in a safe way while hospitality was the “real challenge”. A return to Level 3 restrictions with only outdoor dining would be safer. Indoor dining and pubs would be “more risky”, he warned.

Prof McConkey said that even if numbers were reduced to the same levels as in June, there would still be “a bit of work to do in January” to get numbers down.

Measures such as mass testing for public health staff, sports participants and those travelling by air should all be considered, he said.