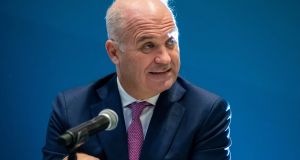 Chief Medical Officer Dr Tony Holohan: “We are seeing a number of things which concern us. There are examples of small numbers of people congregating for social purposes and simply ignoring the important public health messages. They are putting our collective progress at risk.” Photograph: Colin Keegan/Collins Dublin

After more than nine months and over 69,000 cases of the disease, the State passed the milestone of 2,000 Covid-related deaths yesterday, as Chief Medical Officer Tony Holohan urged people to “work together” to suppress further spread of the virus.

But there was further evidence of division between Government and its public health advisers. Senior officials are said to have clashed with Dr Holohan during a meeting yesterday as efforts to draw up a plan to exit the lockdown and manage the pandemic over the Christmas period continue in Government.

According to three sources with knowledge of the meeting, senior officials emphasised to Dr Holohan that the Government – not the National Public Health Emergency Team (Nphet) – would make decisions about easing the lockdown and what restrictions would be in place over Christmas.

Officials, which included the secretary general of the Department of the Taoiseach Martin Fraser, the State’s most senior civil servant, also complained to Dr Holohan that Nphet members were seeking to pressure the Government with a series of media appearances.

One source said it was “made clear” to Nphet “that the Government will make the decision” on reopening, scheduled for December 1st. Another source confirmed that the Nphet “media strategy” was strongly criticised as some senior officials believed that its members are seeking to influence Government decisions through the media.

The Government is facing far-reaching decisions within the next week to 10 days on ending the lockdown, reopening commercial and social life and on how it manages the pandemic during December and the Christmas period.

Yesterday, Dr Holohan – reflecting on the death toll – said the pandemic has “impacted, directly and indirectly, on families and communities all across Ireland”. With the Level 5 lockdown due to expire on December 1st Dr Holohan urged the public “for the next two weeks, work from home, stay at home and follow public health advice”.

The deaths of a further 12 people with Covid-19 were reported by Nphet yesterday bringing the total to 2,006. Nphet also reported a further 379 confirmed cases of the disease. Nphet is due to meet today to discuss the current trends.

Minister for Health Stephen Donnelly told RTÉ the people “haven’t been able to mourn the way they normally would” describing the 2,000 milestone as a “sobering day”.

The issue of exiting Level 5 lockdown was the main topic for discussion last night at parliamentary meetings of the two main Coalition parties. Taoiseach Micheál Martin told a Fianna Fáil meeting the Government will make a decision on exiting Level 5 lockdown next week, and that there will be a Dáil debate on the issue beforehand. He said he wanted Christmas to be “meaningful, enjoyable and safe” and that it would be about “trusting the public with their personal behaviour”.

He also argued the Republic is doing well on controlling the disease in comparison to most European countries.

The meeting also heard calls for clarity on whether pubs will be able to open for Christmas. Senator Lisa Chambers said that pubs are coming under pressure to order kegs in time for Christmas if they are to open, but expressed the belief they would not be able to do so, and that the public may not want to go to a pub even if they were open.

At the Fine Gael meeting, TDs called on the Cabinet to begin consulting with the church on the plan for Christmas. Former minister for justice Charlie Flanagan said advance planning was essential and should include “celebrating the festival of Christmas through Christian worship”.

Elsewhere the Government is seeking Dáil approval for a further €514 million in funding for the health service this year. The money is aimed at covering the costs in 2020 of the Government’s overall €600 million winter plan for the health service which will run until next spring.There will also be additional funding or Covid-related spending in the supplementary estimate.

The supplementary estimate being sought by the Department of Health will also seek to offset income from private patients in public hospital which had been expected to be generated this year but which was curtailed as a result of Covid-19 restrictions .

In the summer the Dáil approved additional spending of almost €2 billion in additional funding for the Department of Health, largely to deal with Covid-19.