Opening of southeast hospice delayed until next year 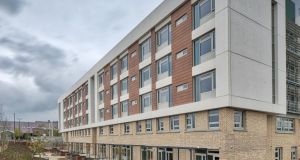 The opening of a new hospice for the southeast will be delayed until next year at the earliest as the HSE has yet to allocate a budget to hire staff for the building.

The South East Palliative Care Centre was handed over to the organisation in April with a view to opening it this month.

The hospice, which has 20 beds, is part of University Hospital Waterford’s recently completed Dunmore Wing. The new building is to see two of its floors occupied by the hospice with the top three floors and its 72 beds being used by the hospital.

A joint submission from the hospital and the HSE’s Community Healthcare Organisation (CHO) for staffing and operational costs of the unit has been prepared and funding allocation is awaited, according to the HSE.

Responding to a parliamentary question by Waterford TD David Cullinane, it said staffing for the unit would happen “when a budget is allocated”.

“I do not understand why this is the case,” said Mr Cullinane. “Both HSE and CHO management have known about the new unit, that it was coming down the line, so to stand here today and tell me that they are waiting for a budget allocation simply does not make any sense.”

He questioned why there was not a “joined-up approach” to the unit and added that the “HSE cannot even tell me [how many staff were due to be hired]”.

The executive had told the Sinn Féin deputy that the number of posts to be created would be “built on over time as the service develops”.

The current palliative care team will begin working in the new facility in the autumn. Mr Cullinane has said he fears the unit may not have staff in place to start admitting patients until 2021. These roles include nurses, occupational therapists, dietitians, doctors and support staff.

When staff are hired, the HSE said it would support the community specialist palliative care teams and primary care teams across the southeast and provide appropriate care pathways for palliative clients in their home, nursing home or community nursing units.

Staff from other parts of the hospital will be “phased” into the building’s top three floors over the coming months. It is understood talks are ongoing between hospital management and the Irish Nurse and Midwives Organisation (INMO) about transferring staff to the new unit.

Some €4 million had been raised by charity Waterford Hospice Movement Ltd for the hospice building. The group declined to comment on the delay.

The new hospice is the first ever regional care centre with inpatient and day service for the southeast. The news of its delayed opening comes on the back of a report by the Economic and Social Research Unit (ESRI) detailing how the region has an unequal distribution of community health services compared with many other regions, with Kilkenny, Wexford and Waterford most affected.

“This is unacceptable,” said Mr Cullinane. “The people of Waterford and the southeast deserve better. This unit is needed today. It needs to be staffed. The funds need to be released.”