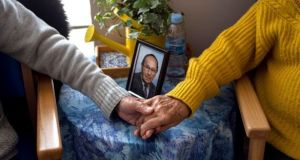 The number of outbreaks of Covid-19 in nursing homes has risen to 155, up four on the previous day. Stock photograph: AFP.

Almost one-third of nursing homes in Ireland have the Covid-19 virus, the Health Information and Quality Authority (Hiqa) said on Thursday.

Mary Dunnion, chief inspector of social services with Hiqa, told RTÉ radio’s Morning Ireland staffing is a real issue for nursing-home providers and that speedier testing would be of benefit.

The number of outbreaks of Covid-19 in nursing homes has risen to 155, up four on the previous day, according to the Health Service Executive.

The number of outbreaks in residential institutions and community hospitals/long-stay units is unchanged, at 58 and 23 respectively, according to the daily report from the HSE’s Health Protection Surveillance Centre.

Ms Dunnion said staff in centres with the virus have to self isolate until it is confirmed they have or do not have the virus. If they could be diagnosed quicker then they could return to work, where they know their patients, she said.

Ms Dunnion confirmed patients are being transferred from nursing homes to hospitals, but “this is not possible in all cases”.

“Every morning, we identify centres that need support”, and this information is “escalated” to the HSE, she said.

“We’re all learning, and there are going to be significant lessons to be learned once this is all over,” Ms Bunnion said.

Meanwhile, Prof Jack Lambert, professor of infectious diseases at the Mater and Rotunda hospitals, has said the spread of Covid-19 in nursing homes is “a catastrophe in the making” and under-utilised staff should be sent to “every single nursing home in Ireland”.

He told RTÉ radio’s Today with Séan O’Rourke show that nursing homes need to be a priority.

There was a lack of thought over what needed to be done to avoid being in the same situation as Italy and Spain, he said.

Preparations should have been in place – instead nursing homes were told they were responsible for making their own plans, Prof Lambert said.

That was “a huge disaster” that has led to more than 200 clusters in nursing homes, he said.

Prof Lambert said that “up to half” of the country’s nursing homes could have clusters of Covid-19.

He called for “boots on the ground” and for “under-utilised” staff to be deployed from the Mater hospital into nursing homes to assess what PPE is needed.

Separately, Dublin Coroner Dr Myra Cullinane has warned not all Covid-19 deaths are being reported as required by law.

Dr Cullinane has written to medical staff in hospitals and other locations who are responsible for completing death certificates, saying they must comply with the requirement to report “any death in the context of proven or suspected” Covid-19 to her office.

Asked on Wednesday night whether he was aware of problems over the non-reporting of Covid-19 deaths, Chief Medical Officer Dr Tony Holohan said he was not – “but I’m not saying there aren’t logjams or other problems in the system of reporting.

The deaths of another 38 patients diagnosed with Covid-19 – including a 23-year-old – were reported by the National Public Health Emergency Team on Wednesday, bringing the total to 444.

It is understood that three healthcare workers have died as a result of Covid-19 since the pandemic reached the State.

Of the 12,547 coronavirus cases confirmed to date, 2,872 cases are associated with healthcare workers.

Some 657 new cases of the disease were reported by Irish laboratories on Wednesday as well as 411 processed in a German lab. The new cases, the highest daily total so far, brings the total number of confirmed cases to 12,547.

Dr Holohan said the increase in cases in recent days was more likely to be related to an increase in testing rather than a change in the underlying pattern of disease.

Nine residents in a Co Laois psychiatric centre have died from Covid-19 since the weekend.

Eight of the residents, aged between 66 and 84 years, had tested positive for Covid-19. The 17 residents who remain at the facility are being managed “as if Covid-19 positive regardless of test results or the presence of symptoms”, the HSE said.

Separately, two healthcare workers at a Kilkenny hospital – a woman in her 50s and a man in his 40s – fell ill while working at St Luke’s General Hospital and have died. The woman was a member of the household staff, while the man was a healthcare assistant.

The woman and man were tested for Covid-19 and found to have contracted the virus. The woman died in the hospital on Wednesday, and the man died at his home on Tuesday.

The number of people who have died so far in the crisis stands at 137,020. The United States is the worst-affected country in terms of infections and the number of deaths, with 639,055 cases – nearly a third of the world’s total – and 30,925 fatalities.

The European Commission on Wednesday published guidelines on how to ease out of lockdown restrictions as a series of European Union member states began announcing the reopening of some shops, schools and businesses.

It warned targeted restrictions and hygiene precautions are likely to remain a feature of life until a vaccine for the disease is widely available, which is not expected for at least 12 to 18 months.

“This roadmap is not a signal that containment measures can be lifted as of now but intends to provide a frame for member state decisions,” said commission president Ursula von der Leyen after the launch of the guidelines in Brussels.