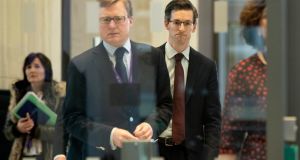 Dr Cillian De Gascun (left), chair of the Covid-19 expert advisory group, and Dr Ronan Glynn, deputy Chief Medical Officer, attend a press conference at the Department of Health in recent days. Mr De Gascun said it was “certainly possible” that some restrictions would have to be retained until a vaccine for coronavirus is developed. Photograph: Colin Keegan/Collins Dublin

Lockdown measures to help stem the spread of coronavirus could remain in place into the winter, the chair of the Health Service Executive’s expert advisory group on the pandemic has suggested.

Dr Cillian De Gascun, director of the National Virus Reference Laboratory and a consultant virologist, said it was “certainly possible” that some restrictions would have to be retained until a vaccine is developed.

This could take at least six to 12 months and “people probably need to be cognisant of that”, he told RTÉ Radio One’s Saturday with Cormac Ó hEadhra.

Asked whether colleges, schools and creches could remain shut beyond September and into the autumn, Dr De Gascun said “it is certainly possible”.

“I would hope that we would be in a position over the summer to have a better picture of what is going to happen in September,” he said.

“I don’t want to start predicting what is going to happen in September at this point in time. But ultimately what we are trying to do is suppress this epidemic, and control it insofar as we can.”

“Ultimately it is down to us as a society to control this because there is no magic bullet at this point in time, so restrictions will stay in place until we can see significant evidence that we are controlling or flattening the curve,” he added.

A time delay between restrictions being implemented and taking effect – if they are effective – means Ireland will only find out in the coming seven to 10 days whether the tightened measures ordered by the Government last week have been successful.

“These next two weeks are really crucial for us,” he said.