John Walsh says it was ‘nothing like as regimented’ in 1918-1919 as it is today. ‘I think the Government is doing a good job’ 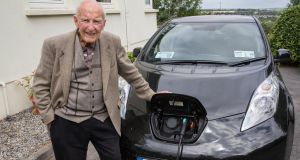 John Walsh with his electric car. He is hoping the coronavirus ‘will be over’ by the time he turns 105 in September. Photograph: John D Kelly

The Government is doing a good job in trying to curtail the spread of Covid-19, according to one of the country’s oldest citizens who remembers the impact of the Spanish flu in Ireland more than 100 years ago.

John Walsh (104) was just three years old and living with his parents, Richard and Louise in Clonmel, when his father caught the Spanish flu. The flu killed thousands in Ireland and upwards of 50 million worldwide in 1918 and 1919.

“I was born in O’Shea’s Nursing Home on New Quay in Clonmel, Co Tipperary on September 10th 1915 so I was very young when the Spanish flu arrived in Clonmel,” said Mr Walsh, a former chief accountant at Bulmers.

“Dad was an electrician by trade and he was the first manager of the newly opened Magner’s Theatre which was a cinema in Clonmel and we lived at the time at O’Connell Tce which was a very small modest terrace of houses.

“Dad got the Spanish flu... My mother didn’t get the flu but I remember as he was getting better, she would let me peek in the door of his bedroom to see him.

“The warmth of his smile of welcome remains with me to this day – thankfully he survived and although he was a smoker, he lived until 1967 and was into his 70s when he died,” said Mr Walsh, a widower who lost his wife, Ciss in 1974.

Historian Dr Ida Milne, who has written about the Spanish flu in Ireland in her book, Stacking the Coffins: Influenza, War and Revolution in Ireland 1918-1919, estimates that 800,000 were affected by the disease in Ireland.

‘Run off their feet’

“According to the registry, 20,057 died from flu in Ireland and I have added about 3,000 pneumonia deaths to that – I think it’s quite conservative because doctors were too busy treating the ill to be worried about registering the dead.

“I estimated there were probably about 800,000 cases on the island if the case fatality is 2.5 per cent,” Dr Milne told the RTÉ’s Radio 1 History Show recently.

As for the impact in Co Tipperary, local historian Sean O’Donnell in his book Clonmel 1900-1932, A History said the illness was at its most deadly in the town in late October 1918.

“In one week, 120 cases were admitted to St Joseph’s Hospital and 12 people died – whole families were stricken down as were many members of the police and military,” he noted.

“Doctors were run off their feet, one of them wondering if the outbreak was of influenza or some type of plague.”

Although Mr Walsh’s recollections of the Spanish flu are confined primarily to the impact on his own family and in particular his father, he doesn’t believe the authorities then were as proactive as the Government today.

“As far as I can recollect, you didn’t close things except to keep people apart from each other. It was nothing like as regimented as it is today. I think the Irish Government is doing a good job — I wouldn’t be so sure about the British.”

Mr Walsh lives with his son, Colman, and his wife, Marjorie. Mr Walsh, a father of five, made headlines a few years ago when he bought an electric car after he turned 100 to do his bit for the environment.

He limits his outings now, however, to a 10-minute walk in his garden. Honoured each birthday since he turned 100 with a medal from President Michael D Higgins, Mr Walsh is hoping to make it to his 105th birthday in September and receive another letter from Áras an Uachtaráin.

“This year, assuming I get to my birthday on September 10th, I will have five of these medals and that means I will have one for each branch of the family – it’s going to be tricky but hopefully the coronavirus will be over by then.”