Coronavirus: Government to scale up tracking as shutdown extended 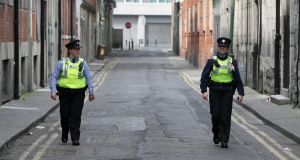 A massive effort is under way to scale up the tracking of Covid-19 cases so restrictions on economic and social life can be eased early next month.

Taoiseach Leo Varadkar on Friday announced an extension of the current, two-week-old shutdown for another three weeks, until after the May bank holiday weekend, in order to further slow the spread of the virus.

Mr Varadkar said that the Government was working and planning towards a relaxation of the restrictions, but declined to say when this would happen.

But public health officials say any easing of the restrictions will depend on our ability to test widely for the disease and to trace the contacts of confirmed cases so these can be quickly followed up.

“We simply have to be in a situation where we’re able to do a substantially greater number of tests in the future than we are doing now,” chief medical office Dr Tony Holohan said last night.

With the testing system bedevilled by lengthy delays over the past month, Dr Holohan said the HSE was redoubling its efforts to deliver a “fit-for-purpose” testing and contact tracing system. People were working “day and night” on the sourcing of reagent – a vital chemical used in tests – and on the development of laboratory capacity in Ireland and abroad, he said.

“We can’t be in a situation where delays of three to four days occur” in the testing of people suspected to have Covid-19, he said, and testing capacity and information capacity would be scaled up to address this challenge.

Of the deaths that have occurred so far, 54 per cent arose in nursing home settings

Ms O’Beirne, of consultants EY, who is being seconded to the HSE executive management team for six months, is also tasked with devising operational plans for “a phased return to business as usual”.

Last night, the National Public Health Emergency Team (NPHET) reported the deaths of another 25 patients diagnosed with Covid-19. There have now been 288 coronavirus-related deaths in the Republic.

The youngest person to die with Covid-19 so far was 32 years old, and the oldest was 105, according to a breakdown released by NPHET.

NPHET also reported 480 new confirmed cases on Friday, the second-highest daily total. The total number of confirmed cases now stands at 7,054 – or 8,089 when tests processed in Germany are included.

Of the deaths that have occurred so far, 54 per cent arose in nursing home settings. In nursing homes affected by outbreaks, one in five staff, and one in six residents, have tested positive, Dr Holohan revealed.

In a press conference at Government Buildings on Friday, Mr Varadkar said that on the advice of public health experts, the restrictions have been extended until Tuesday May 5th.

Mr Varadkar said Ireland had “slowed the spread of the virus considerably, but unfortunately we have not stopped it”.

If progress continued over the next three weeks, then “we can be hopeful” that the restrictions would be eased. He added, though, that there was no guarantee that this would happen.

Minister for Health Simon Harris confirmed he would extend the regulations empowering the Garda to enforce the current restrictions for the same period, until midnight on May 4th.

He said that at the beginning of the outbreak, infected people had been in contact with on average 20 people.

The Government’s decision to extend restrictions chimes with advice on Friday from the World Health Organisation (WHO), which warned lifting lockdown measures too early could spark a “deadly resurgence” in infections.

“The way down can be as dangerous as the way up if not managed properly,” WHO director Dr Tedros Adhanom Ghebreyesus warned. Internationally, the number of deaths from coronavirus passed the 100,000 mark.

Meanwhile, the Government is to allow private-sector medical specialists treat their existing fee-paying patients in the public system on condition they do not charge them.

In revised Government proposals, the HSE can also pay to use private rooms which consultants may have outside of private hospital premises if such arrangements are deemed necessary and represent value for money.

The National Virus Reference Laboratory (NVRL) has sourced a new supply of chemicals that will enable it to carry out up to 10,000 tests a day.

The NVRL has reached agreement with Genomics Medicine Ireland for the supply of reagents used to test swab samples taken from suspected Covid-19-infected patients.