Coronavirus driving surge in use of telemedicine 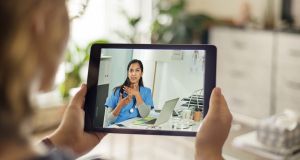 While some healthcare providers had previously embraced telemedicine, the outbreak of Covid-19 has prompted others to make it part of their services.

The coronavirus pandemic has changed everything. How we live, how we socialise, how we work; Covid-19 has had a profound impact on our daily lives.

The overburdened health sector, naturally, is bearing a lot of the brunt of the current crisis. But it is also showing a lot of innovation in response to the coronavirus restrictions. In addition to the pressure caused by the pandemic, there are the more run-of-the-mill health problems that need to be dealt with. Telemedicine services have replaced face-to-face appointments where possible, with electronic prescription services

For some patients in University Hospital Limerick, the idea of holding appointments over video call is not a new one. The hospital adopted the video-conferencing approach for selected patients some months ago, using Microsoft Teams to communicate.

Bringing patients into a hospital for appointments at best is an inconvenience, at worst carries a number of risks. Video calls deal with both ends of the spectrum equally well.

“It was always something that we were interested in,” says Collins. “In a world of GDPR, it was having a secure network that we could trust for our patients, for everything to be secure. That was one of the hardest things to put into place.”

The service is using Microsoft Teams to deliver one-on-one video exercise classes for a select number of its patients. Patients no longer have to travel to the hospital for regular sessions, which means they are not being exposed to a hospital environment where they may be vulnerable to picking up an infection. It’s also less tiring on the patient, some of whom would have to travel long distances to attend the vital sessions, and can be more cost-effective for the patient.

“I have patients I want to see more, but who are reluctant to attend appointments or can’t because of school,” said Ms White.

“I offer them an online appointment and if they want to go ahead with it, I send them a link to Microsoft Teams, and they open the link at their appointment time. It’s easy to do and doesn’t require a lot of prep work.”

It doesn’t replace every trip to the hospital; clinical appointments still require people to attend in person. The number of sessions that can be carried out over video is also limited due to available equipment for conducting the video calls. But it gives patients a choice.

“Some will still come in, others will choose this. It won’t always be an option,” said Collins. “Sometimes we need to see them in person.”

There have been hiccups – mainly down to wifi connections, which poses another issue for patients in more rural areas underserved by high-speed broadband – but the service has so far worked well for the team, and there has been interest from other physiotherapists in the hospital too.

Microsoft has seen a massive surge in users since the coronavirus outbreak began. On March 11th, around the time of its third anniversary, the company said there were 32 million daily users of Teams. A week later, that figure was 44 million, an additional 12 million users over the week.

“The technology itself is quite robust, it’s a proven application,” said Frank O’Donnell of Microsoft Ireland.

Online doctors’ services have been around for some time. But a mixture of patient reticence, regulations and other factors led to slow adoption – at least in Europe.

In 2018, the European Commission predicted the global telemedicine market would reach €37 billion by 2021. It also estimated an annual growth rate of 14 per cent. In the current public-health crisis, online services are experiencing renewed interest, and are playing a vital role in continuing to deliver healthcare services to patients who either can’t or are reluctant to attend their doctor’s surgery in person for routine matters such as renewing a prescription. That may lead to a far greater boost in figures by next year.

In Ireland, for example, Webdoctor offers online consultations with registered doctors, while Irish Life Health offers a service called Digital Doctor and VHI has signed up with VideoDoc to provide virtual appointments.

Webdoctor has been going since 2014, when it offered a prescription service through an online consultation form. Founded by Oisín Kim and his brother Howard, the service has now expanded and includes an option for a video consultation with one of the company’s doctors.

Its sister company, NuaHealth, is also offering a platform for use in community clinics and healthcare settings. The technology can be used by doctors and clinicians to hold virtual clinics, offering patients online consultations through smartphones, tablets and computers instead of coming into the surgery. That means not only can patients potentially suffering from coronavirus be seen by their GP without leaving home and risking spreading the virus, patients who are considered vulnerable and are currently “cocooning” at home can also access their doctor.

NuaHealth also has the stamp of approval from the health authorities; it consulted with the Department of Health and the Health Service Executive on the service. The HSE also partnered with NuaHealth to produce a HSE-branded video-consultation tool for GPs and other healthcare providers.

The company has had some success already, with more than 360 clinicians nationwide having used the service.

“We’re absolutely delighted with the adoption of the service, the feedback from clinicians and patients has been overwhelmingly positive. In some cases, it is the only way some clinicians can continue to provide care,” said Kim. “We were midway into the development of a major software release that we are confident will make a huge impact on medicine, so taking a small part of it and customising it for use by clinics like this was a simple decision for us.”

Part of the success is down to the audio quality offered by the service. Kim said feedback from some clinicians showed surprise about the quality of the audio compared with a phone call, which can be important for being able to hear chest sounds, audible wheezes and how wet or dry a cough might be.

“We’ve been shocked by the number of clinicians who started to use things like WhatsApp and thought disabling caller ID would hide their mobile – it doesn’t – or who used Skype and found their inbox full of messages and photos from patients and then started to get video calls from patients to their Skype accounts in the following days,” Kim said.

The service, which has 705 GPs and 445 pharmacies already signed up, sends a secure notification of the prescription details from the GP’s computer to the patient’s pharmacy. Patients can then be notified by text when their prescription is ready. In normal times, it was a convenience for customers; in the current healthcare emergency, it is an invaluable tool to help enforce social distancing.

But that wasn’t all the company was working on. Clanwilliam also has a video consultation service for doctors. The company is making it available to GPs, private consultants and pharmacies during the coronavirus epidemic.

“The impact of Covid-19 is widespread across the country and we know that during this time our healthcare professionals are under enormous pressure. While the focus is on flattening the curve and stopping the spread of the virus, there are still people who need contact with their medical professionals to treat other minor illnesses and in other cases support them with existing conditions,” said Eileen Byrne, managing director of Clanwilliam Health.

Clanwilliam said the number using its services has now increased to 1,524 GPs, and 782 pharmacies, indicating a healthy interest in digital health services.

There are others in the market, taking a different approach. MyClinic365, which was founded by Irish GP Dr Laura Malone and Keith Lyne, enables doctors to schedule, manage and collect payments for remote tele-consultations. Patients need a working internet connection and either a smartphone or a PC. The platform has been providing its services for free during the coronavirus crisis, with Amazon Web Services providing MyClinic365 with AWS Activate credits to support it.

While some healthcare providers have openly embraced the new technology, it was the outbreak of Covid-19 that pushed others to make it part of their services. Now that it has been introduced, will doctors continue to use it once the social restrictions around the pandemic are eased? It may be difficult to go back, which means a permanent change in how we interact with healthcare providers.