On the nurses’ picket line: ‘We are in it for the long haul’

‘We are very resolved..... it has to continue, it has to finish,’ INMO member says 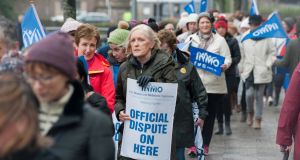 Striking nurses have become even more resolute because of the Government’s failure to engage in meaningful talks, INMO members on the Cork picket line said .

“People are even angrier on the picket line this morning after hearing Simon Harris yesterday – the fact that the Government would not engage in meaningful talks with us while they seem happy allow the cost of the national children’s hospital spiral out of control really has made people even more resolute, “ Margaret Frahil, senior nurse manager at the Mercy University Hospital in Cork said.

Ms Frahill has been nursing for 40 years but said she has never seen the situation so bad with morale in the profession at its lowest ever point as more and more nurses are opting to either leave the profession or go abroad to work.

“They are either nurses in their 20s or else those over 50 – there are very few in their 30s and 40s. I’m 40 years nursing but there are very few of my age group left nursing now – healthcare has changed beyond recognition and the pay just doesn’t relate to the work that we do now.

“It’s a very different health care today – we have greater complexity, greater acuity, shorter length of stay, an aging population, a growing population and all the young graduates talk about is leaving the profession or going to another country . It’s at rock bottom at the moment.”

On their third day on the picket line, nurses in Dundalk, Co Louth said, “we are in it for the long haul”.

The public support for them did not seem to falter with constant beeping from motorists passing the Louth County Hospital.

It is the second time INMO chairperson Colette Vize has gone on strike.

“In 1999 we had nine days without pay and I swore never again. I’d say every single nurse on that picket line swore we never would (strike) again so we were really pushed to pin of our collar this time to say ‘Yes’ to strike.”

She said the resolve is there to continue for as long as necessary.

“We assume there will be compromise or resolution at some stage but we are in it for the long haul if that is what it takes this time because we undertook this strike with such thought and consideration.”

“We have made a commitment and we will stick with it.”

They have support from the final year nursing students from Dundalk Institute of Technology and Colette said, “I am passing on all my 30 years of experience to them and i don’t want to see it go to another country; they are already thinking of leaving.”

She understands why because she went to Australia after she qualified 30 years ago. “I left because there were no jobs. Now there are jobs but the pay, the conditions are not there.”

Fellow INMO nursing representative Emma Ross, said, “If I didn’t have a family and I was their age I would be gone. When I qualified 16 years ago I was straight into a permanent position and I was on good wages and that pay has been cut so much in that 15 years.”

On the picket line outside University Hospital Limerick, senior theatre nurse Anne Marie Connery, a said the main reason for the INMO strike was to highlight “unsafe staffing levels”.

“Nurses cannot give the quality of care and the proper care that patients deserve.”

“We are in dire straits here. Not only do we not have enough nurses but we don’t have beds to put patients into either.”

“The Government just seem to be putting their head in the sand about it. Realistically there are no (new) nurses. Nurses that are being trained are leaving the country - when is it going to stop.”

Her job has changed from specifically caring for patients to having to “fight to get patients beds”.

“A lot of you’re time is spent on the phone (asking) does this patient have a bed, does that patient have a bed...and the student nurse or newly trained staff nurse that you’re trying to train up is not getting your full attention and time”, she added.

“We have such a huge catchment area here and it’s at bursting point.”

Asked if nurses would let up on their strict action without a deal from Government on pay and conditions, she replied: “No, no, no, no, simple, no. We are not giving up, because if we do, we have achieved nothing.”

“It’s not just for ourselves, it’s for the general public.”

The president of the INMO has said the union cannot end its dispute without gains because if it does, the exodus from the service “would be of biblical proportions”.

Speaking on the picket line outside Sligo University Hospital, Martina Harkin Kelly said “it appears to be a case of who blinks first” between the two sides.

Reiterating the determination of the members to persevere with the action, she said she believed that the Government was fearful about next Saturday’s rally in the capital because massive public support, which she expected, “would send out a very strong message”.

“This cannot be for nothing. The consequences for the service would be catastrophic because I think the exodus would be of biblical proportions (if nurses do not gain anything)”.

She said while there had been no apparent willingness to negotiate on the part of the government “ something has to give”. She was not giving up hope that progress would be made. “We are into our third day. We would hate to think that all eight days we have planned , will come to pass”.

Most of those on the picket line emphasised that the members would not back down even in the face of what they see as intransigence by the government. Claire Connolly who qualified as a nurse 20 years ago said nurses would not be backing down. “We are very resolved. As far as I am concerned it has to continue , it has to finish”, she said.