On day three of their strike INMO general secretary Phil Ni Sheaghdha has said that the strikes by nurses have lifted the lid on the massive risk that exists in the health service on a daily basis due to staff shortages. Video: Bryan O'Brien 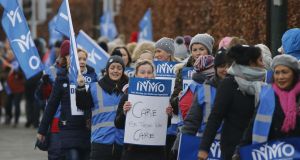 The strikes by nurses this week and last have lifted the lid on the massive risk that exists in the health service on a daily basis due to staff shortages, their trade union has said.

As members of the Irish Nurses and Midwives (INMO) hold a third 24-hour strike over pay and staffing issues on Thursday, its general secretary Phil Ni Sheaghdha said all of a sudden HSE managers who due to the stoppages were working a 24-hour cycle were recognizing this risk.

Asked whether the work stoppages were placing patients at risk, she said: “there is a massive risk in the health service in a daily basis due to staff shortages. What we are doing is highlighting the risk that exists every single day.”

She said the INMO had made very stringent efforts to put in place emergency services that will continue.

“We have been meeting the HSE continuously for the last three weeks. We have agreed many derogations. And in addition to that we link in with then every two hours.

“She said the union was satisfied with the emergency services that were being provided during the days of strikes.

“What we are not satisfied about us the level of care that exists on an ordinary day. We know that is high risk and does not provide a safe level of care for patients. That is why nurses and midwives are protesting and on strike.”

Ms Ni Sheaghdha said the union had received no correspondence from Government about finding a resolution and she said her members remained “resolute”.

About 40,000 nurses who are INMO members are taking part in the strike today in a dispute over pay.

About 50,000 patients are likely to be affected by the stoppage which will see all outpatient, inpatient and day surgery appointments scheduled for today cancelled.

Minor injury units will be closed and routine community nursing services and health centre nurse clinics will also be cancelled.

Thursday is the third in a series of eight 24-hour strikes planned by nurses over their pay claim and nurses are planning to strike for three days next week. Nurses also plan to strike on February 19th and 21st.

They are seeking pay parity with other medical professionals which would equate to an approximately €7,000 pay rise per nurse, or a rise of around 12 per cent.

The Government has said it will not offer additional payments to nurses, although it said on Monday it was willing to discuss staffing and other non-pay issues. Nursing unions have rejected the proposal.

Separately, an overtime ban by psychiatric nurses has resulted in what the HSE describe as “significant challenges” in ensuring a safe service in mental health facilities Wednesday. This ban will continue throughout Thursday night. The HSE said it was “continuing to engage and negotiate with the PNA”.

On Wednesday night, ambulance service staff said they would also go on strike next week. Up to 500 ambulance workers plan to strike for three more days in the weeks ahead as part of a dispute over trade union representation rights and the deduction of union subscriptions at source from their pay.

The action will run from 7am to 5 pm each day. Members of Nasra already staged a 10-hour work stoppage at the end of January.