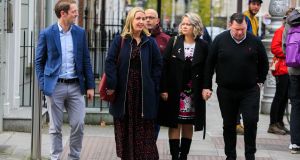 Vicky Phelan, the Limerick woman who became a campaigner over the CervicalCheck controversy, described the number of politicians who attended the State apology to those affected by the scandal as disappointing.

On Tuesday, Taoiseach Leo Varadkar apologised to the women and families who were impacted by the operation of the CervicalCheck screening programme.

In his statement to the Dáil, Mr Varadkar said it was a “broken service, broken promises, broken lives – a debacle that left a country heartbroken. A system that was doomed to fail. We apologise: to our wives, our daughters, our sisters, our mothers.”

The women and families of those who were affected by the programme’s failures attended the apology. Many of them were in tears and clutching pictures of those that have passed away from cervical cancer.

Ms Phelan, and the 221-plus patient support group that represents those affected, said they welcomed the Taoiseach’s apology and described it as a “watershed moment”.

“I think this will help a lot of families and women to move on because there is still a lot of anger and I do think the apology was more than we expected and we’re very happy with it,” Ms Phelan said.

“I do think there were far fewer politicians in the chamber than we would have liked, to be honest. There could have been a few more there. Everybody has a wife or a mother or a daughter, so that was one thing I did notice: there was definitely a shortage.”

She also said there was “a lot more work to do” in terms of rectifying errors within the screening system.

Stephen Teap, whose wife, Irene, died in 2017 from cancer after receiving two all-clear test results in 2010 and 2013, welcomed Mr Varadkar’s reference to officials “downplaying” the extent of the controversy.

“An apology is more than just using the words ‘I’m sorry’, it’s acknowledging the truth and what happened in the past,” Mr Teap said. “I welcome the fact that the Taoiseach referenced the downplaying of the debacle over the last 18 months which was, I suppose, frustrating and hurting an awful lot of us.

“After all of these reports that we’ve seen, and then you see the Department of Health coming out and downplaying the situation and trying to dumb down exactly what happened, when we know the pain and suffering that has been caused in the background,” he added.

He said that although an apology won’t change anything when he goes home, he wants to ensure that this does not happen to anyone else in the future.

“The best step with moving forward is identifying the failures, acknowledging what went wrong, and I think that was definitely achieved here today.”

In a statement, the support group said the acknowledgement and apology have “huge significance”.

“They are central to the process of healing and of rebuilding our lives, and the lives of those who love, support and care for us,” the group said.

“And now, let the words of today – words of dignified acknowledgment and apology – let them help us heal our broken hearts.”