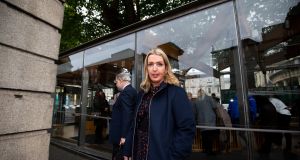 Taoiseach Leo Varadkar has delivered a State apology in the Dáil to the women and their families impacted by the cervical smear test controversy.

Controversy over the screening programme was sparked by Limerick woman Vicky Phelan, who has cervical cancer, settling a High Court action in April over the reading of her smear test. Ms Phelan and fellow campaigners Stephen Teap and Lorraine Walsh were among about 150 people who attended the Dáil to hear the apology.

Mr Varadkar said the women and their families had suffered “from a litany of failures” in the operation of the CervicalCheck screening programme.

“We vow now to make sure it never happens to someone again,” he said.

Mr Varadkar said they knew cancer screening programmes could not detect all cancers. “We also know that many failures have taken place.”

He also apologised for the failure to tell the whole truth and to do so in a timely manner.

“We are sorry for failures of clinical governance; failures of leadership and management; failure to tell the whole truth and do so in a timely manner; the humiliation, disrespect and deceit; the false reassurance; the attempts to play down the seriousness of this debacle.”

Mr Varadkar said “we apologise to those who survived and still bear the scars, both physically and mentally. As do their families.

The Taoiseach acknowledged that “today’s apology is too late for some who were affected. For others it will never be enough”.

He said it was a “broken service, broken promises, broken lives -a debacle that left a country heartbroken. A system that was doomed to fail. We apologise: to our wives, our daughters, our sisters, our mothers.

“To the men who lost the centre of their lives and who every day have to try and pick up the pieces. The single fathers and grandparents. To the children who will always have a gaping hole in their lives.

“To all those grieving for what has been taken from them. The happy days that will never be.”

He added that “a State apology may not provide closure, but I hope it will help to heal”.

He said the recommendations in the three reports on the controversy by Dr Gabriel Scally will all be implemented.

He said that “now, in the words of Vicky Phelan, I want something good to come out of all of this”, and he also paid tribute to Mr Teap and Ms Walsh, whose actions had enhanced the response, he said.

“Speaking as a doctor, as well as a politician, a brother and a son, I know the lessons we must learn.”

He added that “we need a better culture in our health service, one that treats patients with respect and always tells the truth. One that is never paternalistic - doctor doesn’t always know best.

“We must always share full information with our patients, admit mistakes, and put the person first.”

Mr Varadkar acknowledged “we have seen further errors in some of the laboratories since the publication of the Scally Report, causing confusion and anxiety, so we have more to do to restore confidence. We are determined to do so.”

But People Before Profit TD Brid Smith said this apology would sit better if the State ceased the challenge to the case made by terminally ill woman Ruth Morrissey and to re-open the audit for other women.

Ms Smith said she supported the programme but “will not take lectures or mansplaining from Ministers or officials” about the system.

And she condemned the outsourcing of tests to other countries and demanded they should be repatriated, a call which was echoed by Sinn Féin leader Mary Lou McDonald who warned some of the lessons of the controversy had still not been learned. She said words “are hollow without the actions to back them up” including repatriation of screening.

Fianna Fáil leader Micheál Martin said he strongly supported the State apology. He said it took a “very brave and determined woman” to go to the High Court before the scandal was acknowledged and a series of reports before the full details were revealed.

He pointed out “this service has saved thousands of lives” but every patient who uses it “has the right to know that everything possible has been done to reduce potential error” and that they would be quickly and fully informed when such errors occurred.

Ms McDonald and she said the screening service should be repatriated to Ireland and not outsourced to other countries.

Labour health spokesman Alan Kelly said the apology was “ the beginning of a healing process and finally we have a proper, informed official acknowledgements of the wrongdoings”.

He said that through this process people had learned to question health professionals in a way that did not happen in the past.

Earlier, Dr Gabriel Scally, the public health doctor who led an inquiry into the debacle, said a State apology by Mr Varadkar to women and their families impacted by the cervical smear test scandal would be very important. “I think this is quite a momentous step and quite unprecedented,” said Dr Scally.

“The three things that really matter to people when things really go wrong badly in the medical system are for someone to tell them the truth, what went wrong, why it went wrong; secondly to say sorry and to really mean that, and from someone with some skin in the game; and the third is to say how it is going to be avoided in the future.”

Dr Scally said his report last year into the affair exposed a “complete failure from top to bottom in terms of the cervical screening programme” and how women and relatives were treated “appallingly badly”.

His recommendations on changing the system are being implemented, he said.

“The thing that has been missing in the middle is someone actually saying we are very sorry, apologising, and really meaning it for what went wrong and the trauma that these women and their families were subjected to,” he told RTÉ’s Morning Ireland.

“I think that is what is going to happen today. I think the Taoiseach as a doctor will feel this very, very deeply, and as a former minster for health, he will understand exactly what went wrong and why it went wrong”.

Dr Scally added: “It is has been a very disturbing episode in health care and it is right and proper that the Taoiseach is making the apology on behalf of the State, for something that really didn’t go very well at all.”

Dr Scally added that he was satisfied with how his recommendations were being implemented by the Health Service Executive, although he said there is “plenty more to do” and some of the changes will take time to “work their way through the system”.

The Taoiseach pledged last summer to make an apology after he met members of the 221-plus support group, which represents women and families affected.

Government sources confirmed Mr Varadkar was due to issue the apology early this week, but declined to comment further.

However, he is expected to say the State should have informed women that they had been given incorrect all-clear test results before they were diagnosed with cancer.

Mr Varadkar is also expected to accept the findings of independent reports into the controversy, which found that tests were being outsourced to more laboratories than was previously known.

More than 221 women were affected by the CervicalCheck controversy. The women involved had developed cervical cancer, after which an audit of their earlier tests was carried out. This audit revealed “discordant” results but most of the women were not told of them.